If ever the term practice makes perfect can be used, it was from the sample of a weekend of musical notes coming from the Lester Centre of the Arts, as the youth of the city showcased their talents for appreciative audiences.

The 24 hour burst of Sound started on Saturday night with the talented group of students with Ian Lihou's Ring Music System who put on a remarkable presentation of music that spanned the decades.

The hard work at the Music studio paying off with a top end showcase that should spawn some great bands to come in town over the years to come, that as a night of music showcased some great grooves, big voices and soulful interpretations of a number of popular classics from the 60's and on.

Mr. Lihou has once again done a spectacular job in bringing out the best of his students and developing their skills at the Ring Music System, with the night providing for performances that showed some remarkable confidence and talent.

On top of the Great Music, Prince Rupert residents responded with some Christmas cheer of their own, with the 504 in attendance on the night sharing their enthusiasm for the musicians as the night moved forward.


Through that hard work of the musicians, the Lester Centre, as well as the generosity of the audience they brought in a record amount for their annual show, with $3,877 raised on Saturday night for the Salvation Army Food Bank and Christmas programs in the city.

You can check out the next showcase from the Ring Music System in May, when the gather again for their RockStock presentation in the Spring.

If you were at the Lester Centre, or missed the chance to attend you can relive the night through the CityWest Community Television Facebook page, or the Lester Centre's own streaming archive.

Sunday it was the turn of SD52 maestro KristyTillman to lead the collective bands of School District 52's elementary schools and that of the middle school, with the annual showcase of talent and sounds of the season from another collection of talented youngsters, some of them familiar from the evening before.

As they rolled through the set list of seasonal favourites and other standards the toes were tapping and crowd again found itself in a Christmas spirit, as the home stretch towards the holidays echoed through the Lester Centre and on into street.

Ms. Tillman once again has brought her ensembles together quickly with the results delivering a big sound. the result of hard work from the students and a strong dedication to their musical craft.

For the final note on the SD52 Christmas Band Concert we'll turn things over to former Superintendent Sandra Jones to offer more on that theme! 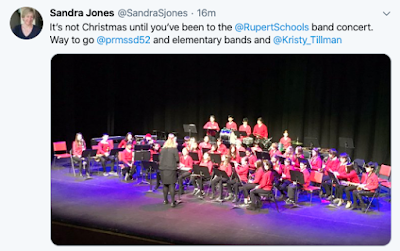 After  a weekend of some great sounds and a showcase of what the young people of Prince Rupert have been up to for the last few months ... As Pete Townwshend and Roger Daltrey might say ...  The Kids are Alright!

Email ThisBlogThis!Share to TwitterShare to FacebookShare to Pinterest
Labels: Music at the Lester Centre