The Northern Sea Wolf is up in dry dock for the foreseeable future, after the ferry which began serving Port Hardy and the Central Coast in June of this year, suffered damage to both of its propellers in a log strike suffered on November 22nd.

From that incident, the vessel has transited south for repair work before it will be returned to service on the Central Coast route. As the vessel had been schedule for refit in the Spring of 2020, with BC Ferries noting that it now will see that timetable moved up in order to complete both sets of repairs in the interest of efficiency. 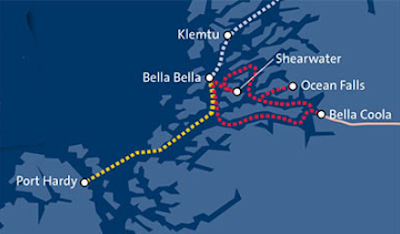 That revised schedule began on Dec. 6, 2019 and will remain in place until further notice.

All customers booked on the Northern Sea Wolf will be accommodated on the Nimpkish sailings, which will run on a modified schedule.

The full advisory on the state of the Northern Sea Wolf can be found here.

The Northern Sea Wolf is a former Greek ferry which BC Ferries acquired and put into refit in 2017, delays meant that it did not enter service on the Central Coast until June of this year, with the official introduction taking place on June 2nd.

For more items of interest related to marine transportation in the region see our archive page here.
Posted by . at 12:58 PM

Email ThisBlogThis!Share to TwitterShare to FacebookShare to Pinterest
Labels: Northern Sea Wolf out of service on Central Coast December 2019