The Christmas holidays make for a lot of reunions and gatherings through the final week of the year and as they have in the past, the Charles Hays Rainmakers are holding their own reunion this weekend, with six teams set to compete in the popular Jim Ciccone Memorial Rainmaker Alumni tournament.

Mel and Ryan Bishop's Senior Boys and Kevin Sawka's Junior Rainmakers are among the line up of players for the Friday and Saturday event taking the court with those who once suited up for the Charles Hays or Prince Rupert Secondary teams of the past.

Also up for the annual challenge this weekend are the 2017-19 team, 2012-2016 squad, 20014-2011 group and the Old Dogs of the tourney from 1946-2003, who will be looking towards some muscle memory and perhaps a slightly more measured pace on the court to lay down the gauntlet to the stars of the past and the current crop of rising young ballers at CHSS.

The Senior boys may have the best leg up on the competition, having just hosted the Caledonia Kermodes at the Charles Hays Gymnasium on Wednesday night, with the home side Makers coming out on top by a score of 95-62.

From the Wednesday night play,  co-coach Ryan Bishop noted that the team had some good balance on the night, with strong ball distribution and some key points from a number of players on the way to win.

The Senior Boys will be put to the test right out of the game with the first game of the tourney set for 1:30 when they take on the most recent group of grads from the Rainmaker program in the 2017-19 team.

The Senior Boys Rainmakers can head into their tournament appearance once again with a top ranking in the province for this week.

The latest listings find the Makers' still holding onto to their grip of the top spot in British Columbia High school Basketball.

Their work getting notice in the Varsity Letters Sports feature from the Vancouver area. 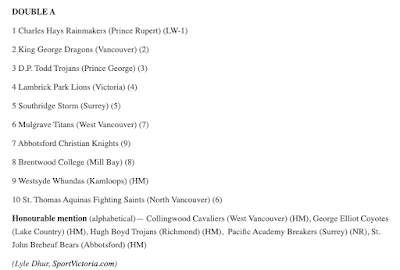 The Junior Boys who have had some strong results in recent weeks, are also in the hunt for provincial notice, bubbling just under the top ten listings in the most recent Junior Rankings of earlier this month.

As the weekend of play gets underway, the teams have been placed into two pools for the competition

The tournament wraps up on Saturday night at 7 PM with the Tourney finale between the two teams that finish atop the listings of Pool A and Pool B.

Admission is Five Dollars for Adults, 2 Dollars for Students, which is good for the all the games on the day that you pay!

The full schedule for the Alumni Tournament can be reviewed below:

For more items of note on Sports at Charles Hays Secondary see our archive page here.
Posted by . at 10:11 AM