Prince Rupert ends 2019 with a chance for some boasting! That with a top ten finish in the BC Business Best Cities for work in BC listings


With the future of port development serving as the engine for the region, BC Business is somewhat bullish on the future for Prince Rupert, once again placing the city in the top ten of their year end listings of the Best Cities for Work.

The sixth annual edition of the rankings from the Business magazine put 46 communities up for review for 2020 and once again found the North Coast favourable in a number of categories to gain it a ninth place finish, down three spots from last years number six spot, but still found among the Top Ten. 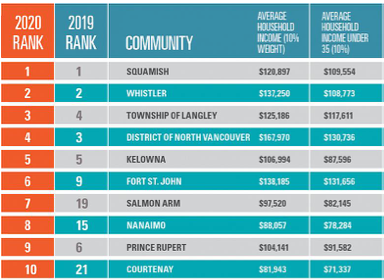 The survey used a weighted scale to determine where each of the 46 communities would place making note of the following:

Prince Rupert benefited the most from the growing influence of the port driven jobs which have provided for healthy income growth for those working for the Port or its related industries in the region, as well as a low unemployment rate which marked many of the other top ten finishers.

The placement of the city in the top ten comes, despite it being the only community to register a negative in the population growth category, though with the city and its range of partners recently making note of the crunch in jobs for non port related industries and businesses, that is a trend they no doubt hope will be reversed with some in migration over the next few years.

Terrace placed twenty third in the listings, that makes for a drop of five places from last years 17th spot placement.

The synopsis of the BC Business findings can be reviewed here.

The chart highlighting the city's placement in the various categories is found at the bottom of that page.

Email ThisBlogThis!Share to TwitterShare to FacebookShare to Pinterest
Labels: BC Business survey on Best Places for Work in 2020