Signs, signs everywhere a sign ... commercial sector lots on the market as hopes rise for a Prince Rupert renaissance

With a pair of recent items of note on real estate charting the course ahead, the hopes for a remake of the downtown area are high at the moment, with a number of commercial or residential lots currently in play in the core of the city.

As we noted this week, the City of Prince Rupert has put out for Bid a plan to redevelop the McBride and Third Street area into the Prince Rupert Gateway area, while a recent real estate transaction has returned the Highliner Inn to local ownership.

And with the Highliner the centre point for a quick peek around the neighbourhood,  we noted of a number of properties along that stretch of First Avenue West that are now available, or perhaps could be if the price is right. 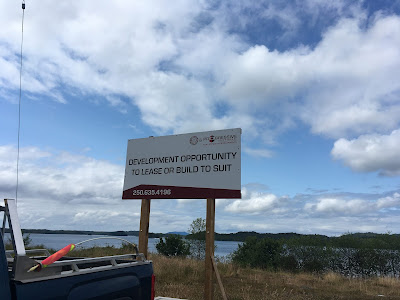 Across from the tallest building in the city is the lot that once was home the sprawling Elizabeth apartments complex. That structure consumed by fire over a decade ago and has been on and off the market over the years, the location featuring an expansive view of the Prince Rupert waterfront, though one that also includes a freight marshalling yard directly below. 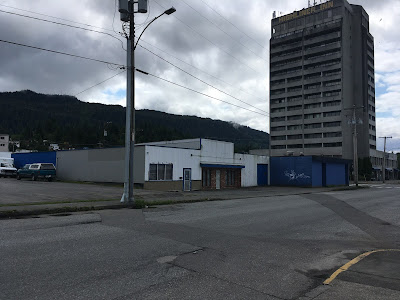 To the east of the Highliner Inn is the old Electrician building, which while not seemingly on the realty market at the moment sits empty. The offices and shops of Pacific Northwest Electric having relocated to the Yellowhead Centre area. The electrician lot one which could also make for part of the rebirth for the downtown region. 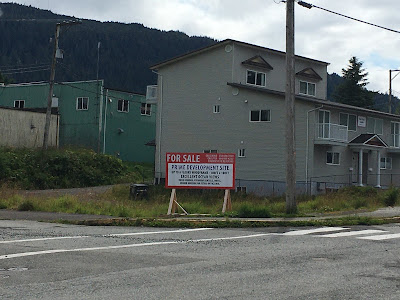 Just down the street to the west on First is another lot that is available, the site the former Commercial Hotel, the once popular beverage house was another casualty of fire. The lot one which could offer either a commercial or multi unit residential option for development.

For the most part, much of the city's vacant landscape through the downtown area has been created due to some of the high profile fires over the last twenty years or so.

Those events making for a similar situation of vacant land to be found both along Second Avenue West and Third West corridors over the years.

The prospects for renewal stalled over much of the last two decades owing to the economic decline for the community in the post pulp mill years; as the population declined the interest in developing the growing number of vacant lots was low, with the city's street fronts still showing many of the scars of that decline. Earlier this year, City Council adopted its new Official Community Plan, the new blue print for community development that the City's Mayor and Council members hope will be charting the new path ahead for Prince Rupert.

The document, which was completed over the course of more than a year was explored in depth in April, looks to create an environment for development and reduce the amount of bureaucracy that is involved in getting proposals into finished developments.

The first project to be explored under the new provisions of the OCP will be the Park Avenue Modular Hotel complex, which would see development of a hotel on a long time vacant site along Park Avenue.

That proposal will be part of a Public Hearing this coming Monday at City Hall starting at 6PM.

While they wait for expressions of interest for the Rupert Gateway plans, how the City approaches that proposal on Monday could provide the first look as to whether the new OCP will be spurring on development as hoped.

Or if there may still be a few challenges ahead for developers towards turning the large inventory of vacant lots into new developments and to deliver on the projection of a city turning a corner from its recent past.

You can review some of the work on the Official Community Plan from our archive page here.

A wider overview of past City Council discussion themes is available here.