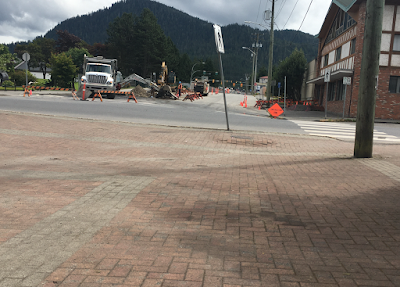 For those travelling around Prince Rupert, the road from points A to B is a transit that is becoming rather challenging these days, one that either needs a re-route (as seen in the latest update for the Cow Bay area today)  or makes for a bumpy experience, with a pair of high profile road woes still unresolved.

Work on a stretch of McBride Street from 1st Avenue West to 2nd West continues on, now in its second week, with the road reduced to one direction and sporadically closed completely as workers continue to repair infrastructure underneath the surface.

The last message from the City of Prince Rupert on that project came on June 30th with the City originally advising somewhat hopefully it seems now that the traffic disruption would be short lived, later updated with the always ominous until further notice.

10 days later there does not seem to be any indication that the work is nearing completion. 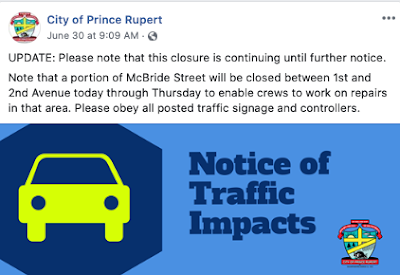 Over at the corner of Fulton and Sixth West, the situation is even worse for motorists, with the intersection now more of an off road trail than a city street.

The gravel placed over ongoing work long since scattered, leaving a bone jarring transit for those who dare to test out the suspension to the vehicles, though so far there have been no reports of cars disappearing into the abyss. 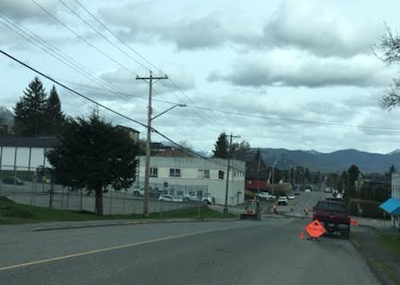 That work which first began in April, was still awaiting a part as of the end of June, with little maintenance done to the road since, making for some challenging driving or a reset on the GPS to find a road that has a clear path and no surprises. 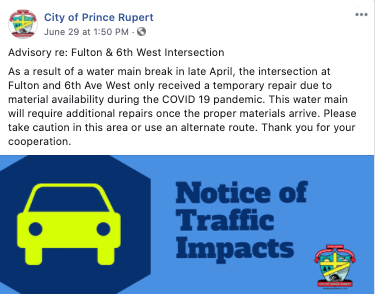 As both projects seem to be facing some significant delays, it might be a timely moment for an update from the City as to an anticipated completion date for both, either by way of the city website or their preferred forum these days of Social media.

Update: Good news for motorists, though perhaps a disappointment for off road enthusiasts, on Friday afternoon, the City of Prince Rupert had dispatched a roads crew to address the challenges of Fulton and Sixth!.


For more notes related to the city's infrastructure see our archive page here.