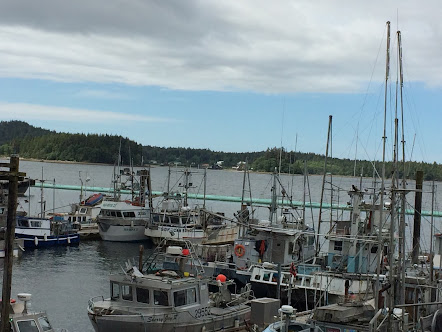 With concerns high over the state of decline of pacific salmon stocks, the Department of Fisheries and Oceans announced the first measures of the 2021 salmon season, with a significant closure ahead for the commercial fishery for this season.

Wednesday, Bernadette Jordan, the Minister of Fisheries, Oceans and the Canadian Coast Guard announced an initial step towards longer-term reductions in fishing pressure on stocks of conservation concern with significant commercial salmon closures for the 2021 season.

"These closures, affecting Commercial salmon fisheries and First Nations Communal Commercial fisheries, will further reduce pressure on salmon stocks and will be included in the 2021-22 Pacific Salmon Integrated Fisheries Management Plan. These conservation-driven management decisions will provide strong protection for the most fragile stocks of concern across the Pacific region."

The 2020-21 Pacific Salmong Integrated Fisheries Management Plan has yet to be released or provided to the DFO website.

The plans which were outlined in the 2021-22 Salmon Integrated Fisheries Management plan will result in closure to nearly 60 per cent of the commercial salmon fishery for 2021.

For First Nations communal-commercial harvesters, the Department will meaningfully consult on options to shift to more selective fishing gear or, where available, to licences for other non-salmon species. These mitigation measures allow for continued economic opportunity agreements under the communal-commercial licence, while helping reduce interactions with at-risk stocks.

Recreational fishers are advised to refer to the DFO website for current regulations in those areas where they plan to fish.

“What cannot be debated is that most wild Pacific salmon stocks continue to decline at unprecedented rates – we are pulling the emergency brake to give these salmon populations the best chance at survival. The decisions to implement new long term closures and permanently remove effort from the commercial salmon fishery were not easy, as they impact people, communities, and livelihoods. But with fewer and fewer returning every year – disappearing before our eyes – we have to act now. We will continue working closely with industry, Indigenous communities, and partners as we move forward with these initiatives and do everything in our collective power to save pacific salmon and ensure a sustainable future. Together, we will turn the corner.”  -- Bernadette Jordan, Minister of Fisheries, Oceans and the Canadian Coast Guard

The full announcement from the Minister can be reviewed here.

Shortly after the Ministers announcement, the Prince Rupert office of UFAWU-Unifor released a statement expressing concern over the federal move, noting of the potential impact it could have on the commercial sector. 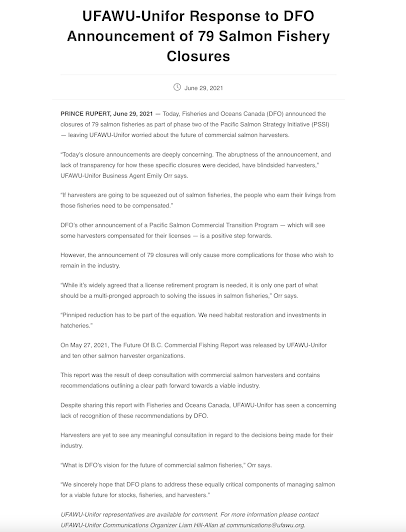 As they note in their media release, UFAWU-Unifor released their own view of how the future for the commercial sector could evolve, that through their Future of BC Commercial Fishing Report.

The document included over twenty recommendations for action for federal and provincial officials.

For more items of note on the fishery see our archive page here.