With housing an ongoing issue of significance for the community, Prince Rupert City Council held an internal workshop on the topic in mid June, with the city's contract planners from iPlan compiling a list of some of the key objectives from that session, the final action list one which was provided for review at this weeks Council Session.

The Contract Planners were not in attendance as part of Monday night's session. So Mayor Lee Brain provided the overview of a report that will chart some of the city's ambitions towards addressing the many concerns in the community towards a need for forward momentum on housing.

As part of the discussion on the night Councillor Cunningham noted of the positive nature of the report and urged council to take quick action towards the Renoviction elements of their Housing actions, observing of the current increase in such activity in the community, calling for a bylaw from the City to prohibit renovictions.

"This is a great start as far as housing, but what I'm concerned about what I'd like to see us jump on as soon as possible is a renoviction bylaw ... I think it's a simple thing to do and we can get staff to look at that bylaw and bring it in, because we're experiencing a high volume of evictions in town, they're under the guise of renovictions but in reality,it's just because people want to get into the action with higher rents and everything. And So I think the first thing we should do with this is bring in a bylaw for renovations" -- Councillor Barry Cunningham

Mayor Brain noted that it is one of the actions he would like to see right away, though noting of a Supreme Court decision is still awaited on a similar law from the Lower Mainland, noting how the city's contract planner would be moving on the concept of Prince Rupert version real quick.
Councillor Mirau concurred with the renoviction themes and added his own interpretation of how the court has approached the bylaw issue and what actions are included in the New Westminster option and how the city could learn from their work on the issue.
On that theme of Renovictions, the province has been making progress towards a more equitable state between tenants and landlords, providing an update on its work this week as well.
Further along on the city's list, the Mayor also spoke to some of the policy elements of the Housing actions that could be moved forward. 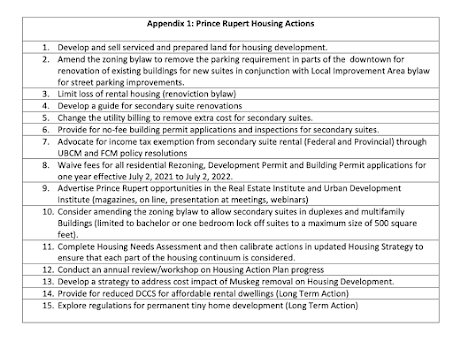 Further to the discussion, Mayor Brain observed of some of the pending housing on the horizon and the challenges in the community towards building homes.
"This is fifteen big moves for this community to enable housing I think, we currently  have over I think at least between 200 to 400 units I believe are scheduled right now for Rupert that are confirmed housing units that are being developed in the community right now. But the biggest challenge in this community is actually developable land that is prepared and we all know that muskeg is one of the biggest challenges, one of our councillors definitely knows a lot about muskeg but musket and development of land is one our biggest challenges" -- Mayor Lee Brain
The Mayor followed up on the challenges of developing housing in Prince Rupert noting of the need for developable land with muskeg among the issues of concern, he noted how increasing for the development of flat land for housing would be a 'game changer' and assist for the pace of development, which would be accelerated and would serve as an incentive for that forward momentum.
Mr. Brain also made note of some of the city owned land in the community and outlined how the city could also work to  reduce some of the red tape for those looking to build housing in the community and how the need for housing is a key element towards the city's vision planning.
Councillor Cunningham also noted of the opportunity for secondary suites and some of the changes the city has in mind through their action list to spur on development, as well as the need for the city to lobby the senior levels of government to help move that option forward.
Councillor Niesh joined the discussion sharing his observations on the need to encourage the development of secondary suites and how it could help address some of the city's housing concerns.
Towards moving the Housing Action plans forward council will be awaiting further word from city staff as to the progress of the list of actions that the Council has endorsed.
Council so far has offered up no timeline for the suggestion that comment from the public should be included as part of their initiative.
Some of that potential housing stock passed another stage on Monday, with Council approving a variance for a proposed townhome development for the Drake Crescent area.
You can review the full discussion among the council members from the City's Video Archive, starting at the thirty three minute mark.
A trip back through the previous years of stops and starts for housing development in Prince Rupert can be found from our Housing archive page here.
More notes on Monday's Council session can be reviewed here.
A wider overview of past Council themes is available from our Council discussion page.
Posted by . at 9:04 AM