What could be the most significant housing development since the Edward Avenue area was developed is up for consideration tonight, as Prince Rupert City Council reviews a proposed development for the Drake Crescent area.

The project is one that has long been percolating, with the prospect of housing for the area first mentioned over six years ago, the latest proposal one that will bring a collection of Town Homes to the last bit of available land in the Drake Crescent area.

The development would add 42 new dwelling units for the city's housing stock, comprised of 11 new new townhomes arranged in a horseshoe pattern of sorts on the vacant land, with the Prince Rupert tree line to remain to serve as somewhat of a buffer between residential and light industrial zones. 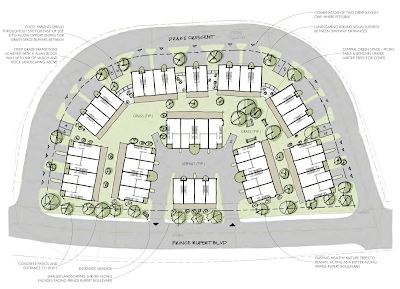 The background to the proposal is available from the City Council Agenda for tonight's session and included in the information piece is a report from the City's contract planners at iPlan, with Chris Buchan offering of a short review of what the housing development will look like.

The package also includes a range of documents and photos to provide Council and interested residents with a complete overview of what is being proposed. 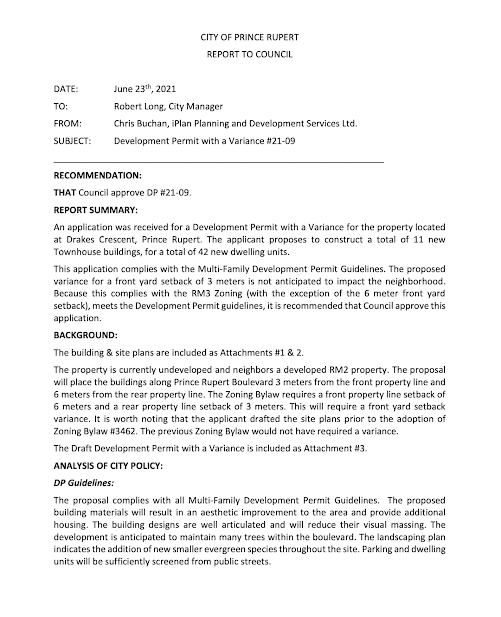 The process of prep work for the land parcel began earlier this year, but has slowed somewhat in recent months, with a fair bit of rock and muskeg still to be removed. 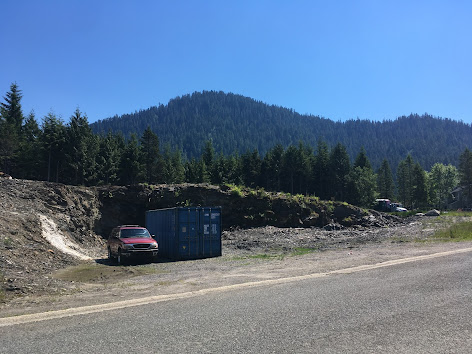 The Full review of the plans can be explored from the Agenda starting at page twelve.

As we noted above, this is not the first time around for proposed housing for the Drake Crescent area back in 2016 Council had approved a proposed apartment/condo development for the same site.

That housing proposal of five years ago would have seen two structures constructed with housing for up to 80 units.

Consideration of the new housing plans marks the first momentum for housing in that area since the summer of 2016.

More notes on this evenings Council Session can be explored here.

A wider overview of past council discussion themes can be reviewed here.

Further themes on housing in the city can be found here.