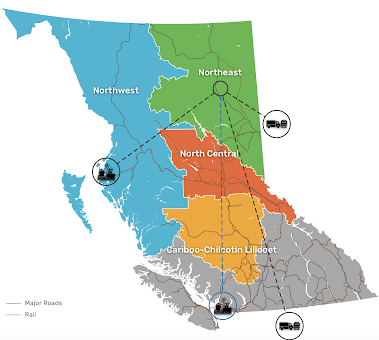 Just in time for next week's Annual Public Meeting, the Prince Rupert Port Authority has released a report that puts the focus on the critical role that international trade plays in local economies across the Northwest and beyond.

The compilation titled "Northern BC Export Profile" was put together as a  joint project for the Port and Northern Development Initiative Trust and confirms Northern BC as a key economic driver for British Columbia, particularly with respect to export sectors like forestry, petrochemicals, mining, agriculture and fisheries.

The information release for the report notes how "These industries, and the communities that depend on them, have been vulnerable to economic cycles. Increasing the capacity, capabilities and flexibility of supply chains, and ensuring competitive market access to a diversified international market for Northern BC products, is a fundamental approach to improving the stability of local industries and communities."

Ken Veldman, VP of Public Affairs and Sustainability highlighted how the report starts a conversation on trade across the region and helps deliver the message of the Made in Northern BC brand.

“The Prince Rupert Port Authority plays an important role in the current and future success of Northern BC’s economy, and this is the first report that collects Northern BC’s international trade data across multiple industries and communities in one place. We consider the new Northern BC Export Profile as the first step in taking a more strategic, regional approach to Northern BC economic development which will help provide innovative ways to develop more value-added opportunities for exports and create sustainable economic growth for Northern BC. Its our way of starting a conversation with regional communities to ensure we are all playing an active role in developing our own ‘Made in Northern BC’ future that builds on our strengths.”

Some of the data compiled for the report brings home the scope of the impact of trade for the province and the nation:

· $17.0 billion of resource-based exports were produced in Northern BC and transported to both interprovincial and international markets. ·
$12.1 billion of Northern BC’s total production, or 72%, was exported to destinations outside Canada, primarily the US and Asia-Pacific. ·
$6.7 billion of petrochemical exports made up the largest single export sector in Northern BC in 2019, all from the Northeast BC region. ·
$5.5 billion of exports shipped to Asia-Pacific markets made it the largest single export destination from Northern BC, led by exports from the mining sector and the Cariboo-Chilcotin-Lillooet region. ·
$2.2 billion of lumber, pulp, paper and pellet exports from the North-Central region drove the forestry sector’s export performance, but forestry made up at least 10% of every region’s export mix. ·
$354 million of agriculture and aquaculture exports represents the fastest growing export sector in Northern BC between 2018 and 2019, driven by the Northwest region’s fish exports to the US and Asia-Pacific. ·
$7.6 billion of Northern BC exports were delivered to port or destination by rail, representing the dominant transportation mode for all sectors outside of domestic petrochemical pipelines from Northeast BC.

Of the Four Regions of the North, the Mining and Forestry industries dominate the Northwest portion of the global trade from British Columbia. 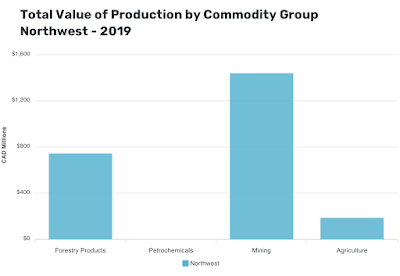 Joel McKay, CEO of Northern Development Initiative Trust makes note of the importance of trade towards future growth of Northern BC.

“The Trust believes the expansion of export markets is critical for the future economic growth of our region. The Northern BC Export Profile is a beneficial collaborative effort that expands on information from our State of the North Report and provides valuable data along with a renewed focus on export development"

The completion of the Northern BC Export Profile came with the participation of the BC Ministry of Transportation and the range of business and industry stakeholders across the Northern part of the province.

You can explore the full interactive presentation here.

The document will help to serve for part of the narrative for the Annual Public Meeting on June 16th, the virtual presentation from the Port will take place from 5 to 6 PM , you can learn more about how to access the event here.