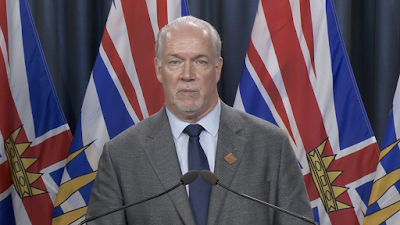 A rather startling talking point from Premier John Horgan has served to deflect much of the attention away from his Tuesday afternoon information session launching the third phase of the BC Restart program.

That after the Premier made what many consider to be remarks devoid of any empathy related to the large number of deaths that have taken place during the current British Columbia heatwave.

Mr. Horgan got into some political trouble during the Question and Answer period of Tuesday's Victory has arrived session, an event designed to celebrate the province's move forward related to its COVID response as the case counts continue to decline and vaccination programs continue to show strong results.

While he did provide for some guidance for British Columbians on the issue of how to deal with the heat and wider thees of climate change, it was a one short passage from his presentation that has made for a firestorm of opinion on Social media overnight and into this morning and will no doubt fill the editorial pages and media commentaries for the day.

"I'll await the coroner's determination as Doctor Henry said Fatalities are part of life and the consequences or the causes of those fatalities are examined by officials that we put in place as a society so that we can get the best information possible ... again this was an unprecedented heatwave, records broken day after day, the public was acutely aware that we had a heat problem and we were doing our best to break through all of the other noise to encourage people to take steps to protect themselves."

Global TV provided a recap of the Q and A portion of Tuesday's information session related to the heat questions, the clip making for some wide exposure on Social Media

The Premier was quick to try to walk back those comments later in the afternoon, with a more measured response, but by that point the political damage was done and the fallout was rolling in fast. 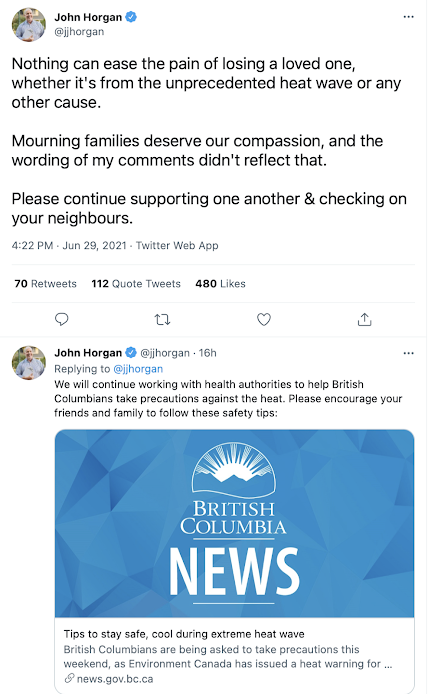 Beyond the politicians taking the Premier to task, some of the province's most widely read political columnists and commentators weighed in, making note of the Premier's rather startling exhibition of a lack of empathy for those families who have suffered tragedy from the heatwave. 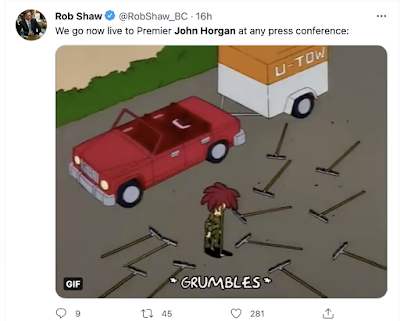 The most concise and on spot comment and observation on the incident coming from the Vancouver Sun's Vaughn Palmer.

The Heatwave has been a dangerous stretch of time for British Columbians, with Emergency Responders frequently updating their communities of the strain on services and rising toll of death that the oppressive heat had delivered.

Those reports are something that should have elicited much in the way of compassion from the Premier rather that what appears to have been an interruption to the narrative of success that irritated him as it interrupted his victory party heading into the summer.

You can review some of those warnings from our Darcy McGee political blog archives.

More items of note from the Legislature can be explored here.