Ellis Ross shares some notes on Wild Salmon for the Legislature 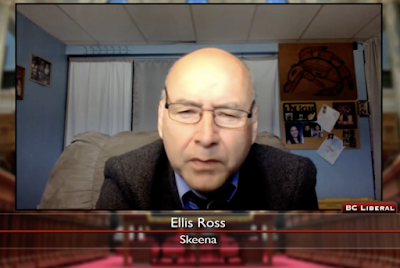 The British Columbia Legislature heard a tribute to the iconic provincial symbol of the salmon on Monday, with Skeena MLA Ellis Ross delivering a presentation to the Chamber in support of the provinces salmon population.

The MLA first noting of some of the current harvesting methods that have an impact on the species.

It's difficult to pinpoint which area of impact should be a priority in terms of saving salmon populations. You have habitat damage, international and domestic overfishing, predation or even overabundance of hatchery fish in relation to food in the ocean.
But there is one definite. As the world population grows, so does the demand for seafood.
We do know that current methods of harvesting are efficient at indiscriminately catching all types of fish, including endangered species. Catch-and-release methods are questionable as to whether or not fish survives or is strong enough to continue the spawning process.
On top of this, marks and wounds from gillnets reduces the price for restaurants who are now showcasing salmon and want their product clear of scars.
Mr. Ross then outlined some new procedures in place that are catching attention in the fishery and how technology may assist in protecting habitats.
Peter Cred has developed a process that is catching the attention of the Fraser River and Skeena River First Nations who want to harvest salmon for cultural and commercial purposes without harming non-targeted salmon.
It is incredibly simple and affordable and yet 99 percent effective. It's so effective that it is even possible to separate which salmon came from the hatchery and which do not. Anyone that understands salmon understands the value of data in relation to understanding how much raw salmon are still left in our Pacific waters.
The Harrison Creek band will be the first to modify this technology to suit their interests and use it on the Fraser River.
By the way, the platform can be quickly converted to an oil spill response platform to collect oil or petrol chemicals.
Considering the huge amounts of oil travelling by train alongside the Fraser River, this will be a way for local organizations to quickly mobilize in case of an oil spill due to a train derailment.
Mr. Ross's commentary came following some statements from MLA's in recognition of World Oceans Day, he provided some video from his contribution to the discussion through his Social Media feed.
More notes on the work of Mr. Ross in the Legislature can be explored through our archive page here.
Items of interest on the fishery can be found from our archive here.
Posted by . at 9:14 AM