BC Liberals point to poor leadership decisions, sideline controversies and media focus for electoral defeat in 2020 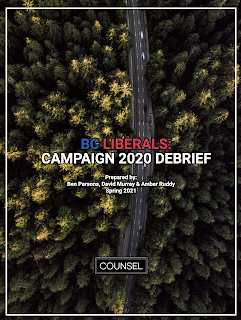 The BC Liberals have released the finding into an internal review into the 2020 election campaign which saw them remove fro power in the province and at the core of the talking points is a look at how controversies through the campaign and some poor leadership from the leader contributed to electoral defeat.

Don Silversides, the Prince Rupert based Acting Party President noted of the path forward for a new leader when the Party makes its selection in February of 2022

“Only with openness and transparency can the work of rebuilding and renewing our party continue and this important review of the 2020 provincial election campaign will help us achieve these goals and revitalize the party. That’s why we are releasing the report to our members and the public today. With the race for a new leader underway, it’s important for members to have this information as we chart a new path forward for the party.”
The Review notes of the timing of the call of the 2020 election and how the early pandemic response from the BC NDP and when the election fell during that period worked to the advantage of John Horgan and his party.
In the fall of 2020, Premier John Horgan and the BC NDP were at a high point in their popularity. Heading into the fall season, the BC NDP raised twice as much money as the BC Liberals, and the public was broadly satisfied with the government’s pandemic response at that time.
Media in the province were perceived to be friendly toward Horgan and his inner circle, and broadly dismissive of the BC Liberal Party and Andrew Wilkinson.

Given the state of public health measures in response to the COVID-19 pandemic, there was limited ability to conduct public events, recruit and mobilize volunteers, or do anything that could create a sense of political momentum. Other elections that occurred during the pandemic in 2020, notably in New Brunswick and Saskatchewan, showed a huge advantage for incumbent governments.

The report includes a number of quotes from the BC Liberal party membership which noted how hard it was for then leader Wilkinson to 'break into the narrative' as well as to note that they party had not been properly been prepared for the call of the election or the campaign that followed.

“The BC Liberals should have been working harder. There is no defense for the lack election preparedness. When in opposition, you should always be ready for an election.”- A comment from a Survey respondent

Other comments noted that the BC Liberals had underestimated the support level for the BC Greens and BC Conservatives, a mistake that they suggest indicated that the party leadership had not bee aware of the most threatening competitors in many ridings.

The Election platform also left many of the party membership concerned that the party had missed the mark when it came to message making.

“Create a platform that represents what British Columbians actually want. I feel like this platform did not connect with either party members or voters at large.”

“Do not fall into a trap of rolling out the same ideas. The demographics have changed immensely, and people have new concerns not strictly related to the economy. Be fresh, come up with new ideas, don’t redecorate old ideas with new names.”
How the campaign was delivered and covered in the media also makes for much review, though the guiding impression on how the campaign was received is summarized by one comment from an un-named lower mainland candidate who notes of the challenges of trying to win an election in a pandemic.
“... to change government in the middle of a real crisis requires extreme dissatisfaction with the status quo. That simply did not exist. We never stood a chance with the media or the public under these circumstances.”
The theme of Crisis Management and how the BC Liberals handled a number of issues involving their candidates makes for some significant critical review, with both the Laurie Throness and Jane Thornthwaite.
That passage of the review notes as to how prior to those two incidents, the party thought that they had a strong issue to challenge the NDP related to the controversy over the nomination of Nathan Cullen in Stikine.
However, any opportunity to take advantage of that issue evaporated as the Liberals own controversies began to dominate the news agenda.
There was a sense early in the campaign that Premier Horgan did not have a satisfactory explanation for why he called an election.
Further, his appointment of Nathan Cullen to lead a riding which was supposed to be reserved for “equity-seeking individuals” was causing real consternation among progressive voters. Horgan’s answers didn’t make any sense, and some on the BC Liberal campaign felt that there was a real opportunity to chip away at his lead.
However, any sense of momentum the campaign had was stalled when the Thornthwaite and Throness controversies hit the news.
The handling of the two controversies points much of the blame towards how Mr. Wilkinson dithered in his approach to defusing the incidents and to get the party back on track.
“There was inconsistent treatment of ‘trouble making’ candidates like Jane Thornthwaite and Laurie Throness. Leadership was needed to get out ahead of these controversies. Instead, they permeated, and commentary ensued for hours or days before adequate responses.“ - A comment from a Survey respondent
Towards the path forward once they have their new leader in place, the review observes that there is a need to have candidates selected and trained  well before the election, as well as a call to be more innovative, practical and develop a big tent to bring in more members and voters.
The document concludes with nine 'lessons learned' from the 2020 defeat. 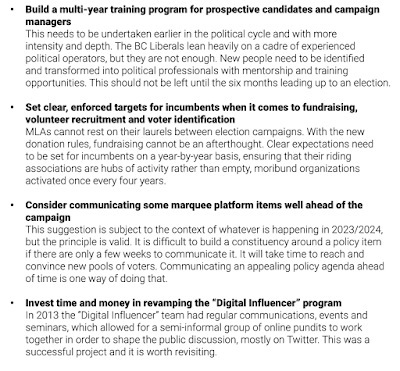 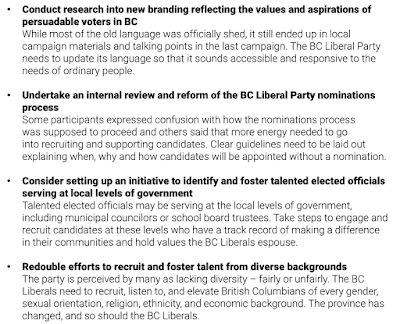 You can review the thirty four page report here.
To date, there are four candidates looking to replace Andrew Wilkinson as the BC Liberal Leader.
Skeena's Ellis Ross was the first candidate into the campaign earlier this year, he has since been joined by Kevin Falcon, Michael Lee and Gavin Dew.
The Leadership election will take place on February 5th, and in their update on the report today, the BC Liberals note that any individual wishing to join the party and wanting to vote on the leadership should be a member in good standing by December 29th of this year.
You can follow the Party's plans for their leadership campaign through they Social media links.
BC Liberal Facebook Page
BC Liberal Twitter Feed
We have also been adding notes of interest on that quest through our archive page here.
Posted by . at 1:06 PM