Inland Heatwave will Bake the Northwest 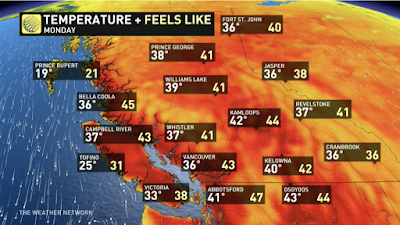 If travel is in your plans this weekend, destinations beyond the Tyee overpass will bring some scorching temperatures for this first week of summer for the Northwest.

What is being called a stationary Heat Dome has parked over much of the province, brining record temperatures to many communities from the Skeena Valley south to the Lower Mainland and Vancouver Island, with only the North Coast and Haida Gwaii an oasis of sorts from the extreme heat.

The Weather Alert for the Inland region noting of Daytime highs of 33 degrees for the Terrace area, 37 in the Bulkley Valley, lows of 14 to 18 degrees and a Humidex value in the high thirties, conditions which will last from today through to next Thursday. 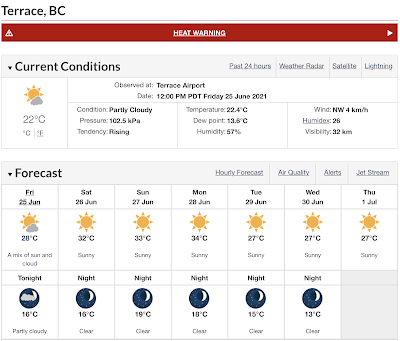 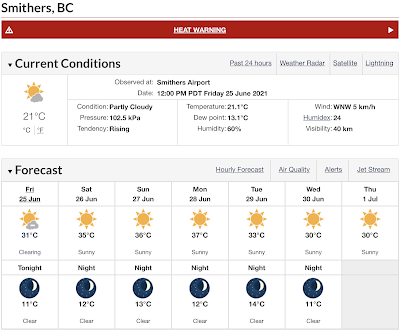 The risks are greater for young children, pregnant women, older adults, people with chronic illnesses and people working or exercising outdoors. Watch for the effects of heat illness: swelling, rash, cramps, fainting, heat exhaustion, heat stroke and the worsening of some health conditions.

Heat stroke is a medical emergency. If you feel dizzy or disoriented seek medical attention. Call 911 or your local emergency number. If someone has a high temperature and is unconscious or confused or has stopped sweating. Cool the person right away.

Northern Health also issued a statement encouraging those in the areas of extreme heat to practice awareness of the conditions.

By comparison, for the Prince Rupert area, the conditions, while warm and mostly sunny won't be quite as oppressive as that found inland. Across Hecate Strait, the conditions for Haida Gwaii make for a most comfortable week ahead. 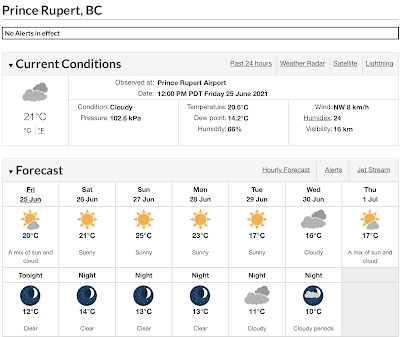 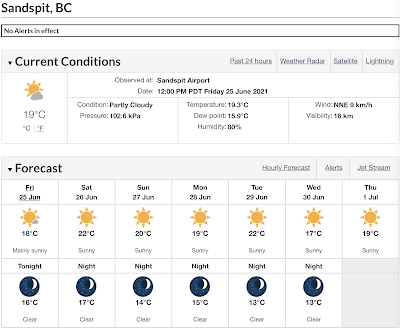 In addition to the dangers posed to humans and animals, the excessive heat has wildfire specialists concerned for any potential spark towards fires in quickly drying forestry areas.
So far the BC Wildfire Service map shows only a few fires of note, mostly in the Thompson and Okanagan regions. 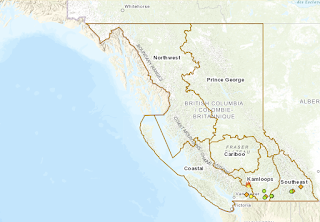 There are however some Fire Bans and Restrictions in place, you can access the list here.
You can also follow our updates on Wildfire concerns across the Northwest from our archive page.
More notes on the weather through the week ahead can be reviewed from our achieve page.
Posted by . at 3:33 PM