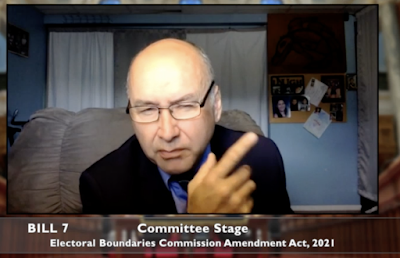 How the NDP government plans to implement UNDRIP in the months ahead made for some extensive back and forth Friday in the BC Legislature, with Skeena MLA Ellis Ross taking one of the lead roles for the BC Liberals when it came to questions for Attorney General and Minister of Housing David Eby.

The conversation was introduced as part of a wider discussion on the Legislature review of the upcoming Electoral Boundaries Commission work.

Mr. Ross used his time in Thursdays session to try to learn more on how the consultation process will be taken on by the government and Indigenous leaders across the province. 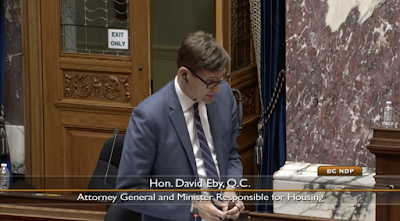 In reply, the Attorney General outlined for the MLA the focus for the Commission when it takes to its work on consultation towards any electoral boundary changes.
We're setting up the commission that is going to go out and do exactly the work the member says needs to happen. It needs to happen. We need to set up the commission. And not only that, we need to give the commission the independence to make the right decision — independent of what the political parties in this place think the boundaries should be.
We're setting up an independent commission with this legislation, with no restrictions on where they can draw the lines, sending them out, charging them to do exactly the work the member says we need to do.
I hope that clarifies things.
The reply from Mr. Eby, left more questions than answers it seems for the Skeena MLA who followed up with a few other notes before his time was up for the debate.
So what is it? And you go on and talk about…. Sorry, through the Chair. Members of this House want to talk about the distinction between rights and title versus the politics, while I'm trying to get to the core of the issue in terms of rights and title and Aboriginal interests and how it's being handled.
And I do understand, clearly, the rights and title and case law. I know the infringements. I know all that. What I don't know is government. Are you going to live up to commitments that you made in your UNDRIP document? That's all I'm asking.
And If so, where is the authorization from 203 bands to the Leadership Council that actually gives the authorization to say: "Okay, they had no interest. We're just going to move along then."
That is not how rights and title works. That's not how consultation works. It might have worked 20 years ago. But times have changed.
I'm not talking politics here. I'm talking something fundamental to Canada. I'm talking about the constitution. I'm talking about 40 years of court cases that led us to today, previous to UNDRIP being introduced.
I'm asking a straightforward question.
Is there a document between 203 First Nation bands that authorizes the Leadership Council to act on their behalf in terms of Aboriginal interests?
The Minister's reply charted much of the same territory as the past from the NDP and its blue print to move forward with the legislation.
"Just because the member says his question is straightforward does not make it so. The member repeatedly says rights and title, the sui generis rights, all the litigation…. He says: "How can government trample over those with this?" It is government's position that there are no section 35 rights implicated in this bill. That is our position.
Although the member has said now two or three times he agrees with me 100 percent on that, it might be his position that that's not the case, even though he said that several times. But I think he agrees with me 100 percent. I believe him when he says that.
So if we both agree that there are no section 35 rights and title rights implicated in this bill, then we're exclusively talking about what does the UNDRIP piece, layered on top of that, obligate government to do.
There is actually a provision in the UNDRIP legislation that talks about this. It says that Indigenous Peoples have the right to maintain and strengthen their own political and cultural systems and that that doesn't come at the expense of their right to participate in the political, economic, social and cultural life of the state, British Columbia.
And this bill is exactly the mechanism by which Indigenous people will have the opportunity, if they choose, including nations, including individuals, including urban Indigenous People, people who live in rural communities….
If they choose, they can participate in this process.
We are setting up the engagement process by which those communities and individuals can participate fully, as is their protected right under article 5 of UNDRIP.
And the member could rightly say: "Hey, you didn't need UNDRIP to do that." No, we didn't. But it's consistent with UNDRIP. It's consistent with our obligations under UNDRIP, and that is the process that we're setting up."
The full back and forth of the Legislature session can be viewed from the Video archive of the Thursday session here, Mr. Ross enters the discussion at the 2:05PM mark of the day's work.
The Skeena MLA has spoken frequently on the implementation of the legislation, providing some commentary from his experiences in the past as Chief Councillor of the Haisla Nation.
For more notes on those contributions to the debate as well as some of the other the work of the Skeena MLA in the Legislature see our archive page here.
For a review of the work of all three MLAs from the Northwest this week, check our MLA's Archive tomorrow, when we take a look at the last week of the Legislature.
More items of interest from Victoria can be found on our political blog D'Arcy McGee.
Posted by . at 3:03 PM