DP World answers protests of last week with suspensions; Port outlines legal options it made use of during incident

Last week's labour disruption at the DP World Container Terminal will have some repercussions, with the global shipping terminal announcing suspensions for 94 members of their workforce that refused to cross a protest line at the Fairview Terminal.

The incident began as part of a call to action for local supporters of Palestine territory residents stemming  from the recent hostilities between Palestine and Israel; with an Israeli cargo ship the Volans from the Jim shipping line the target of their anger and protest.

The vessel had made a number of attempts to dock at other Pacific ports in the US and Canada before charting its course north.

As the ship transited towards Prince Rupert, the local group made their plans to set up their line of protest, which resulted in the 94 workers refusing to attend to their work duties. 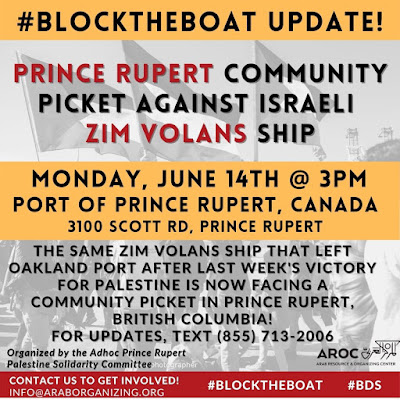 Elements of the response from DP World to that labour action have made it to social media, with the company having citied articles of the collective agreement between the company and the ILWU and suspended the employees of note for three days, noting the incident in their personnel files as well, with the potential for further discipline and de-registration possible if those employees should give cause for reports of further misconduct.

The three day suspension was subsequently reduced to just one day, and while Container Terminal officials had also advised that they were still tabulating the consequences of the illegal work refusal and  had put the union on notice that they intended to recoup damages from those involved, that plan it appears has now been put on the shelf.

The incident was one which has resulted in some hardened opinions from the labour force as well, who have expressed their concerns over the way that DP World has handled the situation.

For the most part, the issue remains an internal one between DP World and the ILWU, with neither having issued any statements to this point through any official channels. 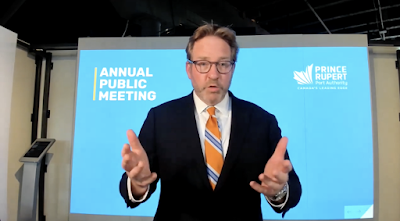 The Port of Prince Rupert addressed the issue as part of their Annual Public Meeting of June 16th, with PRPA Vice President, Ken Veldman noting of the protest and the options that the port has available should another similar situation evolve.

"I would also say that PRPA has a responsibility to maintain the flow of trade through the port  and when that is compromised, the Port Authority has legal avenues that can be pursued when that flow of trade is compromised and the demonstration on it is actually happening within our jurisdiction, which in this case it was.

More specifically to this case, you know certainly there was discussion with the demonstrators as to whether that could occur in a way that was not impeding traffic. But in the absence of the ability to reach that compromise, an injunction was applied for and received and shortly thereafter we were able to get work force into the terminal and continue on.

You know, those are legal  avenues that we don't pursue lightly, but at the end of the day we do have that responsibility and certainly within our mandate and we have a legal system available to address that and we would continue to address it that way" -- Port VP, Ken Veldman on the recent protest at DP World In Prince Rupert.

More notes on the protest and the fallout from it can be explored from our DP World archive page.

While items of interest from the Prince Rupert Port Authority can be explored here.