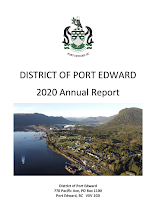 The 2020 Annual Report for the District of Port Edward was released on Friday, the annual snapshot one which notes of the challenges that the were faced by residents last year, as well as some of the exciting plans moving forward for the District.

The publication posted to the District website, provides an overview of the District Operations and brings residents up to date on many of the initiatives that have begun, as well as projects that may be ahead for residents.

It also works in concert with release earlier this week of the District's Statement of Financial Information.

The document opens with a message from Mayor Knut Bjorndal, his remarks noting of the work of Council and staff to move the community through unprecedented times.

As residents make their way through the report, they will learn more of the Strategic priorities that Council has put forward for the community, as well as some notes from CAO Danielle Myles Wilson.

Among their achievements on the year the work on the District Official Community Plan and Zoning bylaw, both of which were adopted this past week.

"Port Edward has continued to be a busy, little town and we have seen an influx of investment for new commercial development as well as residential. To properly plan for these exciting times, staff worked tirelessly over the year to update our Official Community Plan and Zoning Bylaw—two incredibly important documents that will help chart the future for the community. To compliment these guiding policies, a Neighborhood Concept Plan for the Harbourview commercial area was also initiated as well as environmental studies to support development of District owned lands in that area. Updates to key bylaws including Property Maintenance, Traffic and Emergency Program were also important initiatives to provide additional regulatory tools to that will assist us in meeting our OCP and Strategic Plan goals."

The CAO's update also provides some background to the investment into the community and that by the community into infrastructure and other elements of District life.

Further into the document, Port Edward residents can dig into some of the highlights from the Finance Department from their last year of duties.

Reports from Public Work, Maintenance and Operations and the Fire Department also make for items of interest for review.

The District also outlines their efforts towards Emergency Response planning, having recently updated their Emergency Plan

You can review the full document from the District Website here.

Once residents have had a chance to look it over, they are asked to forward any comments or questions to either the CAO or the Council membership.

To keep up with some of the items of interest from the District of Port Edward be sure to bookmark their Website and Facebook page.

Further notes on developments for the District can be reviewed from our archive page.