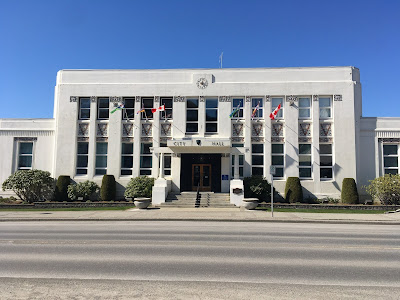 The city's report on employee remuneration will be reviewed at Monday's Prince Rupert City Council session and as the Council members work their way through range of material to be made available, they may take note of a new benchmark that has been reached with this years annual account for the taxpayers of the city.

That of the city once again surpassing the fifteen million dollar mark when it comes to compensation and taxable benefits for the city's work force, that for both city hall staff and unionized workers outside of the Third Avenue West facility.

The report for Council provides for the latest roll call of city staff members that have jumped into the upper tiers of the salary schedules over the course of the last 365 days, with some new names and increasing numbers making their way onto the listings for this year.

Those findings come from the annual release of the report on Civic Employee Remuneration and Expenses, a document which is included as part of this years Statement of Financial Information for 2020.

The annual listings of those employees making more than $75,000 is required to be disclosed by the municipality as part of the Financial Information Regulations, the statement is usually released as part of the large final stream of financial information that is delivered each June.
The growing umber of those crossing over the reporting threshold of 75,000 dollar continues a trend which has seen more names added to the upper tier of the list in recent years.

This year finds 88 names listed in the 2020 SOFI disclosures as part of the latest report,.

With 88 names now the new benchmark for 2020, this years report highlights an increasing level for civic employment in the city over the course of half a decade.

The boost to the reporting lists comes as the city increases staffing or fills in positions suspended in the past by the current Council, with many of the recent hires now crossing over that threshold of 75,000 dollars required for the more in depth accounting.

As it was for the City Council compensation, the travel restrictions of 2020, had a significant impact on the value of travel expenses, which were down significantly from 2019.
Salaries for 2020 that were provided to those working in the upper level of Civic Administration included:

You can compare this years results with those of last year here.
As it is with the expenses review for the elected City Council members; the City does not provide for a larger breakdown of expenses that are claimed by civic employees.

Among the list of  88 names that make for this years list are one of the largest blocks comes from the membership of the Prince Rupert Fire/Rescue Department, along with members of the roster of  911 Fire dispatchers who all are listed as part of the SOFI report for the past year.

The total salaries and expenses from those Fire/Rescue listings accounted for just over 2.2 million dollars for 2020.

The remainder of the positions that are listed from the SOFI report span a number of departments from both civic administration and operations.

The list below provides a better understanding of the remuneration pattern over the last decade, with the Total Employee Remuneration and Taxable Benefits noted as follows:

The full documentation on Civic salaries can be found as part of the City Council Agenda package for Monday's session, the listings are published from pages 12 to 17

Not listed as a department, but included as a payment to suppliers is payment of $3,795,893 to the Receiver General for Canada for RCMP E Division. That marks the amount that the City of Prince Rupert pays to the Federal Government for its contract policing agreement with the RCMP.

This years review makes for a slight increase towards policing from last years report.

Once the Statement of Financial Information report is received by City Council this Monday, it will become part of the permanent record of Financial information that is archived on the city website  offering up an opportunity to make year to year comparisons when it comes to City payroll spending.

You can compare this years notes and amounts above, with those of the past seven years from our archive pages below:


The Review of civic compensation is one of a number of reports for Council,  as we review the data from each, you can review the other notes on those below:
A Year of COVID cut down on expenses, but Council SOFI still comes close to 200 thousand mark
Services and Supplies cost City of Prince Rupert over 38 Million dollars in 2020

Optimism for the future, review of 2020's challenges the narrative for City of Prince Rupert Annual Report

More items of note on the City's budget process can be reviewed here, while our archive of articles on City Council Discussions can be found here.