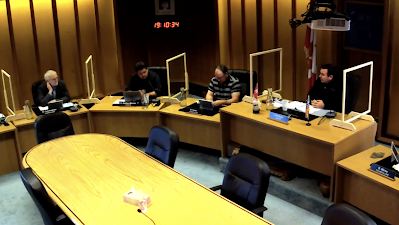 It's still very much a waiting game for the plans to create a Health Advisory Committee in Prince Rupert, with few steps forward to date when it comes to setting up the structure to advocate for health care I the region.

Councillor Barry Cunningham who has been the lead advocate for the committee for a number of years, used some of his time at the June 14th Council session to once again ask about the status of the planned City hosted Health Advisory Committee and the terms of reference.

The Councillor observing that he has been asked about the city's progress on the plan by a number of residents.

In reply the Mayor Le Brain observed that the City is awaiting a presentation from Northern Health, and that he won't be moving forward on any terms of reference until the Council has a chance to communicate with them and to explore what direction the city's involvement should be focused on.

"Well, we're waiting for a presentation from Northern Health so I won't be moving forward on any terms of reference until we have that presentation which I believe is still, they had some holiday scheduling, so I'm not gonna do anything until we have a chance to communicate with them and have a chance to communicate with Northern Health about some of the direction that they feel.

Because ultimately I think we need to talk to Northern Health  and see where things are at and see how we can be best involved, so we'll see what they have to say about that too" -- Mayor Lee Brain on the status of plans for a city led Health Advocacy Committee

The project which has fallen through the cracks at City Hall in the past would provide for a community focused approach towards advocating for health services in the region and has often been cited as needed to help stop the erosion of services to Terrace.

Some of the past notes on the proposal can be reviewed below:

You can review the short conversation on the topic from the City's Video archive page starting at the ten minute mark.

More notes on Monday's Council Session can be reviewed from our Council Timeline Feature here.

Health related themes for Prince Rupert can be reviewed here.