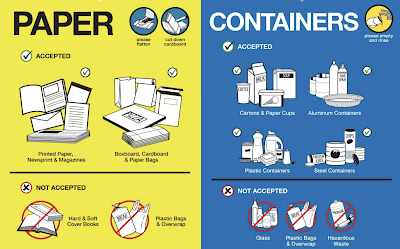 The original plan of a Canada Day period start for Recycling seems to have been a bit too ambitious, with the City of Prince Rupert making note earlier this month of their new schedule for introducing recycling to the community, with a revised launch date for the often request program set for September of 2021.

Some notes on the program have been posted to the City's  Curbside Recycling page on the city website, with the promise of more updates to come as the City gets closer to the September launch.

City Councillor Blair Mirau through a Social Media post  provided some background and his own commentary toward the new system which will bring curb side recycling back to the community. 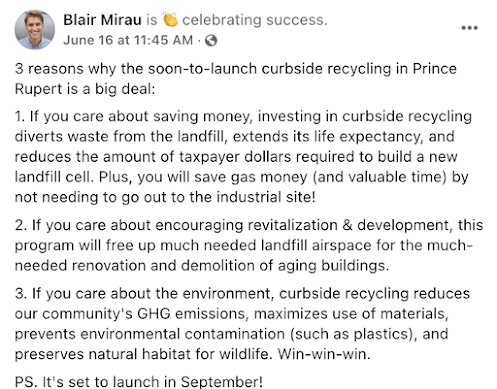 This time around the recycling program is on a somewhat more expanded scale than your more familiar blue box of years past; but it will be a program which still will have some limitations on what they will be collecting with your weekly trash pick up.

Those who have glass, plastic bags, or books will still have to make the trip out to the North Coast Regional District Recycling Centre in the Industrial Park to drop off those items not accepted as part of the city led program. 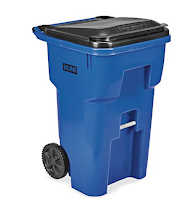 Earlier this year we charted some of the city's ambitions towards its recycling program with a number of items related to benchmark moments in City Council's work on the topic.

As is noted above, the new plan will require residents to use City supplied garbage cans for both garbage and recycling purposes, with the city subsidizing the bulk of the cost of the cans through Gas Tax Funding, though there will be some initial cost to the resident through a utility charge on the utility taxes.

Also unknown with the introduction of the civic service is the fate of a local company, Eco Management Recycling Services, the local entrepreneurs have been filling in the gaps in the current recycling process since 2007, offering home pick up on a weekly schedule for a limited fee basis.

While we await further updates from City Hall, Councillor Mirau appears to be taking the lead as the City Council contact on all things Garbage and recycling, you can explore his themes and submit questions for his consideration through his Social Media feed here.

More notes on past City Council Discussion themes can be explored here.