Optimism for the future, review of 2020's challenges the narrative for City of Prince Rupert Annual Report 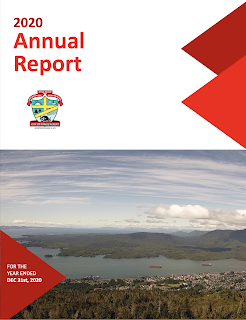 Residents of the region can now get a glimpse of the year of civic governance for the largest community on the North Coast, with the City of Prince Rupert releasing their 2020 Annual Report on Friday.

The document consisting of sixteen pages on information on a range of topics along with photos, accompanied by another twenty seven pages of financial statements and other financial overviews.

Along the journey of the year that was, readers will be able to review messages from Mayor Lee Brain and City Manager Robert Long, learn a bit about the various departments that keep the city moving as well as review the checklist provided of the City's Goals that have been achieved and those that are still on the underway list for the community.

The current of the commentary one of celebration after having come out of a challenging year owing to COVID, one which has had an impact on civic finances and set schedules back for ongoing infrastructure projects.

The report also breaks a bit of news, providing updates on some of those infrastructure projects, as well as towards some of the city's past initiatives that had been put on pause for much of 2020.

The Year in Review opens with the commentary from Mayor Lee Brain, which notes of the city's strong economic and social position, approach towards future infrastructure investment and a tribute to the work of Council and staff towards addressing the COVID limitations to reduce expenses that have helped towards continuity of services.

City Manager Robert Long also puts the focus on the positive, citing the significant progress that the City has seen  noting of the potential of future revenue streams from Watson Island.

He notes of the challenges of COVID in 2020 and the measures taken by the City as well as to how the City moves forward with cautious optimism  with hopes of emerging from this period as a stronger, more united community.

Four of the sixteen pages are set aside for the City's Checklist of Achievements, with the Report making note of

Civic infrastructure also gains some review, the infographic included in the report charing the city's road paving work, capital purchases, funding for major projects and their work on a new RCMP detachment among the items of note. 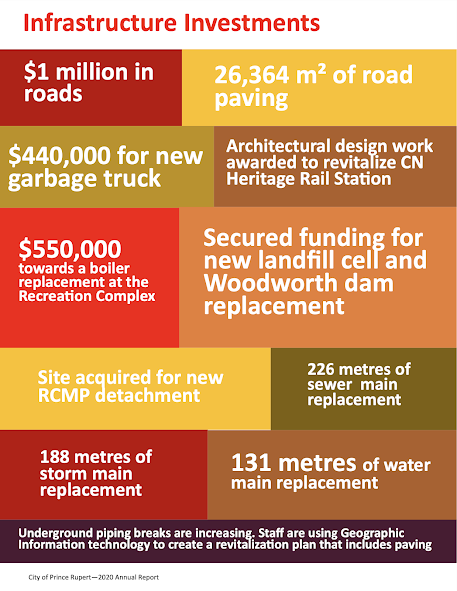 Three more pages are allocated towards some of their recent success on objectives including the delivery of the Official Community Plan, plans for curbside recycling, additional recreation options and plans to move forward to deliver on a new Corporate brand for the city, a project that the city deferred for 2020 owing to COVID.

Included in those listings was an update on the pace of construction for the dam replacement and engineering for the water treatment submarine line, confirming that the project has fallen behind, the city citing COVID and severe weather as the reasons.

The future for the Kwinitsa Waterfront is also featured in their ongoing objectives update, with the city noting of their continued work towards relocation for the Airport Ferry to the location, as well as their work with the Gitxaala Nation who have plans for their own dock for the same area.
The Annual Report also notes of the city's plans for the former CN/VIA Rail station, with plans for commercial development still to be developed.

Those readers with an eye for financial minuteau will enjoy the final half of the report with its charts upon charts listings for a range of items from the Audited Financial Statements. The two which perhaps chart the impact of COVID and the other challenges of 2020 found in the Budget Variance Year End Reports.
Among those notes a glimpse at Wason Island which realized 1.2 million in revenues, but spent 2 million dollars on expenditures. The Airport Ferry noted revenues of just over a half a million dollars with expenditures in 2020 of just over 2 million dollars. Revenues for Recreation Services were down significantly, as was Transit which also still had costs to meet.
Of note from the documents, despite a year with little in the way of itinerant travel allowed in Canadian Waters, the Cow Bay Marina still managed to come close to its budget expectation, while also reducing its expenditures last year. 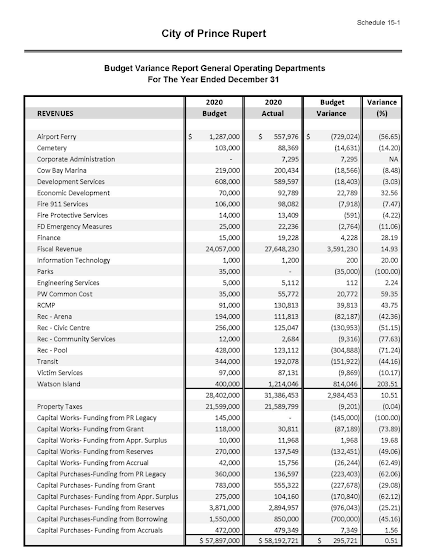 City Council will receive a presentation from City Manager Robert Long at Monday evening's Council session, an opportunity for the city's elected representatives to share their observations on the year that was.
For more notes on the culmination of the City's Budget process see our archive page here.
More items of note on Monday's Council session can be reviewed here.
While our archive of Past Council Discussion themes can be explored here.
Posted by . at 4:00 PM