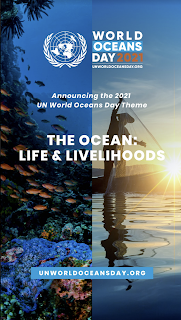 Around the world events are taking place in celebration of the worlds oceans, the day actually first suggested by Canada at the 1992 Earth Summit, something that Prime Minister Justin Trudeau noted in his statement today in celebration of the event. “Today, we join people all over the world in celebrating World Oceans Day. Proposed by the Government of Canada in 1992 and adopted by the United Nations in 2008, this special day invites us to reflect on the role we all play in preserving our marine environment. It is a day to come together and recommit ourselves to protecting the world’s oceans for our children and grandchildren.
This year’s theme, ‘The Ocean: Life & Livelihoods’, reminds us how important the oceans are to life on the planet and to many people’s livelihoods. In Canada, they are the source of nearly 300,000 jobs, and we rely on healthy marine ecosystems to sustain our food supply and the vibrancy of our coastal communities. Economies around the world depend on the health and resilience of our oceans. We know that we have to protect them to ensure a better future for all of us.}
The United Nations has picked up on the theme, with this years focus on the The Ocean: Life and Livelihoods , the day long presentation from the UN featuring a range of guest speakers to speak to issues of conservation and potential threats to the Ocean environment

You can explore how World Ocean Day is being observed around the world here.