An opposition motion from the NDP found almost unanimous support in the House of Commons on Monday, with all opposition parties and a smattering of Liberal MP's lending their approval to the motion related to Indigenous Reconciliation from NDP leader Jagmeet Singh.

Skeena Bulkley Valley MP  Taylor Bachrach made note of the opposition success, while also providing a link of the vote tally, introducing the voting roll as part of the public record.

Among those to abstain from the vote were the Prime Minister and much of his Senior cabinet.

Of the eleven Liberal British Columbia MPs, Five voted in favour of the motion, six abstained. 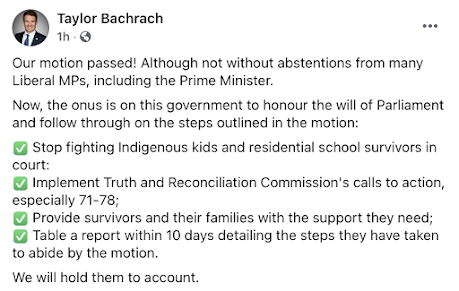 Included as part of the text of the motion were calls for the Federal government to cease its current litigation through a current appeal before Federal Court, as well to accelerate the implementation of the Truth and Reconciliation Commissions Calls to Action related to funding for investigation into the deaths and disappearances o Children at Residential Schools.

So far, with the motion non binding, there has been no indication from the Federal Government how they may use the guidance from the House today towards their ongoing engagement on themes of Reconciliation with Indigenous people.

It's anticipated that Parliament will soon rise for the summer and there is continued speculation that Canadians may be heading to the ballot box before it resumes in the fall.

That may mean that any follow up on the motion of today may not be seen until the Fall or beyond, depending on how the Liberal government chooses to move forward in the lead up to a potential election.

More notes on today's vote can be explored later this evening from our political blog D'Arcy McGee, where we track much of the day to day work in Ottawa through our Ottawa Observations feature.

You can follow more on the work of the Skeena-Bulkley Valley MP from our archive page here.