Councillor Barry Cunningham provided for the first Travel Advisory of the summer on June 14th, advising council of changes ahead for the BC Ferries schedule on the North Coast, that owing to the repairs required for the Northern Expedition until August.

"People should note that if they're going to be travelling by BC Ferries, the Northern Expedition is down and going to be in dry dock probably until the first week of August for repairs. So they'll be using the Northern Adventure on the winter schedule for both Route 10 and 11 which is the Port Hardy - Prine Rupert  and Prince Rupert - Haida Gwaii. So anyone that is planning on travelling by ferry should look into the schedule and that because it's going to be a little bit different than the every second day that people are used to for travel on the North Coast"

BC Ferries released the details of the Service Change on Tuesday, June 15 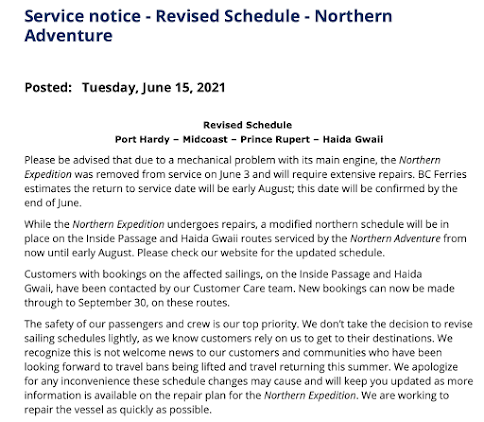 The timing of the repairs is one that will have an impact on the tourism sector this summer, which had some hopes for a bit of a bounce back from last years closed status and facing even more challenges this year as the Alaska Cruise ships skip all Canadian ports for 2021.

Beyond tourism, the reduced service will have an impact on residents of Haida Gwaii and coastal BC who rely on the more reliable summer schedule to attend to medical appointments and other business and travel to the North Coast or points beyond.

So far, NDP MLA Jennifer Rice has only noted of the service interruption by way of relaying a CBC News story through her Social Media page. 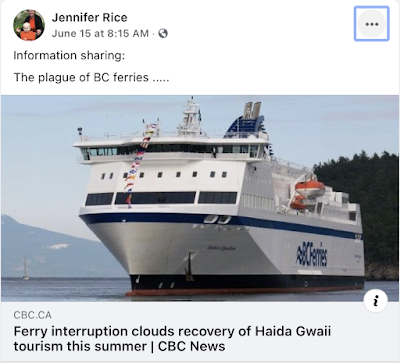 It was a somewhat more subdued response that that found from Ms. Rice's days of opposition, when the MLA would often note of the challenges for residents and visitors when such situations evolved.

While the Northern Expedition sits in dry dock for repairs, the Northern Adventure schedule can be accessed here.

The Travel notice from the Councillor can be reviewed from the City's Video Archive starting at the nine minute mark.

More notes on Ferry Travel on the North Coast can be explored here.