7.9 million dollars in funding from the Federal and Provincial Government will be put to use over the next four years to help provide for some stability in operations for public transport in under-served rural communities across Northern British Columbia.
And announcement on Friday from the BC Government outlined how Northern Development Initiative Trust will administer the funds, with engagement to take place with Indigenous communities, regional districts, local governments and other stakeholders to develop and implement a grant program to address the range of transportation shortfalls across the North.
“Northern B.C. is a vast region with many unique communities, several of which are isolated. Safe, consistent and affordable transportation is a necessity for many residents of the North, especially now as the province is reopening and travel will increase. We applaud the Province of B.C. and its recognition of the importance of northern transit service, now and into the future.” -- Joel McKay, CEO, Northern Development Initiative Trust.
The funding will enable existing bus services such as BC North Bus and a regional collection of community to community bus options to be sustained and enhanced.
As part of the provincial share of the funding, NDIT will analyze  the existing services with its partners and stakeholders in order to establish a criteria for the grant program. 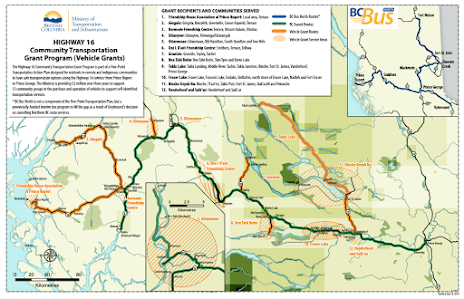 The BC North Bus and the BC Transit Community shuttles, along with some local and First Nation organization options were put in place in 2017 to address the reduced service in the region from then nation carrier Greyhound.
In subsequent years that service has expanded following the  shut down of Greyhound service across much of the province in 2018.
The BC Transit Community shuttles operate in Northwest communities from Terrace to points east.
At the time of the Shuttle program introduction in 2017, the City of Prince Rupert had opted not to participate in that program, a position which they maintain in 2021.
A service operated by the Friendship House has offered twice a week service to Terrace since 2018.
More background on Friday's announcement can be explored here.
Further items of note on Transportation across the northwest can be reviewed from our archive page.
Posted by . at 10:19 AM