The Department of Fisheries and Oceans has rolled out its much anticipated Strategy initiative to protect Wild Salmon stocks in British Columbia,  which officials say will make for the largest ever government effort to save Pacific salmon, stop declines and rebuild populations.

The strategy was introduced on Tuesday by Bernadette Jordan, the Minister of Fisheries, Oceans and Coast Guard, who provided a video to explain what the Federal government has in mind as they move forward with the program.

The Pacific Salmon Strategy Initiative features four pillars towards DFO efforts to identify and prioritize the areas for action. 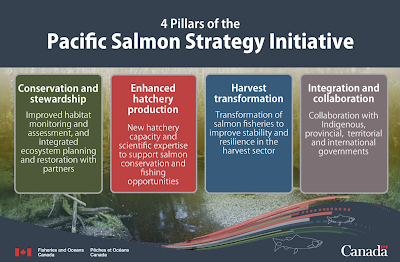 As they move forward to put the measures in place, DFO will be looking to engage further with Indigenous Coastal communities, governments at all levels, the fishing industry, recreational fishery, environmental organizations, scientists and academics.

The process of implementing the program will be a flexible one with the Federal government noting that it will be introduced in collaboration with all of the stakeholders in the fishery.

Given the complex and lengthy (4-5 year average) reproductive cycle of Pacific salmon, addressing the declines will involve a series of flexible, integrated measures that will be monitored and adjusted over the next five years and beyond. Work under each pillar will be advanced in collaboration with the wide range of Indigenous partners, harvesting groups, stakeholders and communities who depend on Pacific salmon, and who have been calling for dramatic change. --From Tuesday's launch of the Pacific Salmon Strategy Initiative

A full backgrounder on the Pacific Salmon Strategy Initiative can be explored here.

One of those stakeholders has already offered up some early feedback for Minister Jordan, with UFAWU-Unifor issuing an information statement on Tuesday, challenging any perception from the Federal government of any overfishing in Pacific waters of the commercial fleet.

While it is evident that salmon are in a state of crisis, so are B.C.’s harvesters — DFO has a responsibility to both salmon fishermen and industry workers. There is no evidence of overfishing by the commercial fleet. Rather, it is current policies combined with a lack of salmon that have created a crisis. --UFAWU-Unifor's response to yesterday's Federal Salmon strategy initiative

Their full statement, also shares the concern of the union towards the state of the pacific fishery and notes of the lack of any productive relationship between active fishermen and the Department of Fisheries.

Those concerns and many others, were outlined in a UFAWU-Unifor commissioned report which we reviewed in May, that document featured a range of recommendations towards improving salmon runs, allocation of resources, access to the fishery resource, issues of governance and areas of entry and exit planning for those in the industry. 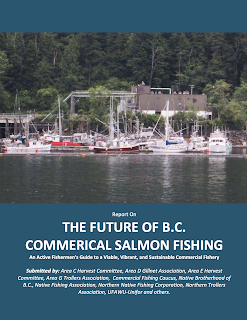 The recommendations in the UFAWU-Unifor Report came out of the two day Future of the BC Commercial Fishing Conference, which was held in January 21st and 22 of this year.

That full document can be examined here.

More items of note on the Fishery can be explored from our archive page.