As British Columbia starts to move out of its long period of COVID hibernation, one of the key foundations for many communities of the Highway 16 corridor and into the Cariboo is making ready to resume it's operations.
That as the Central Interior Hockey League begins to prepare for a potential September return.

The seven team circuit suspended its operations for 2020-21, the decision one which while hard for league officials and fans was also a necessary one with larger gatherings banished for much of the last eighteen months.

The league which is a gate driven operation needs fans in the stands and with the rinks for the most part empty the financial foundation was not in place.

Now that the province has released its Restart program in BC, league officials feel sufficiently confident for the future to begin to ramp up their planning for 2021-22.

League President Ron German, who also is the architect of the Prince Rupert Rampage,  is looking for confirmation from all of the teams by July 1st and the indications seem positive for all seven to return to the ice.

This season may also bring a new entry to the circuit, with plans in motion to introduce the Nechako North Stars to CIHL play this fall, the team to play out of Vanderhoof. It would mark a return to the CIHL for the region, which previously hosted the Omenica Ice.

The North Stars have launched a Facebook page to spread word of their plans.

While the CIHL makes its moves towards a return to the ice, there is also some potential competition brewing in some of the communities of the region, with a unsanctioned junior league making some enquiries around the Northwest.

The GMHL, which is a Junior A league out of the Ontario region has put out some feelers for potentially locating franchises in British Columbia, having recently contact municipal councils in Smithers,  Houston and Kitimat.

So far they have not expanded much on what they would have planned or how their operations would move forward. As well, the league seems to have developed a bit of a chequered record in some of its past ventures in Alberta.

For most communities, the CIHL is the familiar face and one which is heavily invested in their communities, so the threat probably isn't one to be too concerned about or one likely to see much in the way of progress.

An example of that community focus can be found from the Prince Rupert Rampage, which in recent weeks has been helping lead the push towards full vaccination for COVID for the community, with members and officials of the team featured on the team's Facebook page as they received their second shots at the ongoing clinic at the Jim Ciccone Civic Centre. 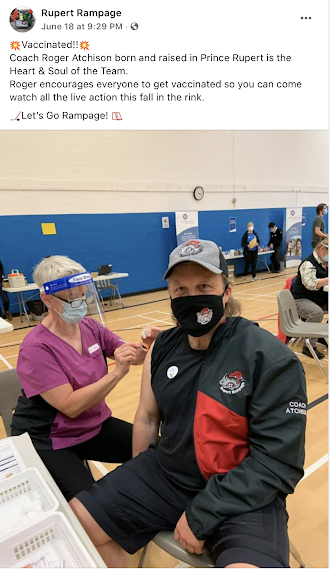 If all goes well, they'll move over to the rink at the Jim in September and the roar will finally  return to the McBride Street madhouse.

You can keep up today on the CIHL and the Rampage through the team's Social media feed and website.

Below are the Social media pages for the remainder of the existing CIHL teams, time has stood still on those portals since February of 2020 for the most part.

Soon however they may soon provide a chance to chart their progress and planning through the summer as they make their way forward to the ice this fall as well:

We'll chart notes on the return of the league through our archive page here.