Canadian National Railway is obviously a key partner with the Port of Prince Rupert and when it comes to shipping coal, the Port is  finding that  the relationship with the railroad is quite helpful in moving forward the story of the Port.

The benefits of using the Port of Prince Rupert for coal shipments were highlighted in a recent business forum in Tumbler Ridge, where Jay Roberts, an Account Manager for CN outlined some of the key aspects of shipping through Prince Rupert.

While explaining CN's coal supply chain which makes use of terminals in the Lower Mainland and Thunder Bay as well as Prince Rupert, on pure delivery scheduling, the transit time from Prince Rupert  which is a day closer to Asia, as well as a low waiting time through Prince Rupert the advantage for shipment seems to be through the northwest. 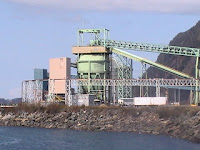 In the course of the conversation, CN also outlined its ambitious expansion plans over the next five years, with the bulk of the Northeast coal destined to be routed through Ridley Terminals and towards that process expansion of CN infrastructure across Northern British Columbia is in the works.

The full review of CN's update to the northeast coal producers can be found in the Tumbler Ridge News.
Posted by . at 2:54 PM