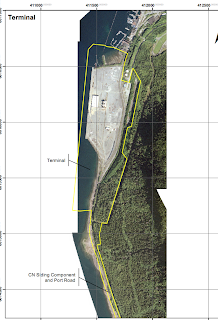 The Port of Prince Rupert is moving forward towards a two stage expansion of the Fairview Container Terminal, the first of which could be operation by 2015.

The process is now in the final public comment period, when that period closes on November 16th, the Agency will then take all of the information from the Comprehensive Report and the comments stemming from it into consideration ahead of their decision.

The two stage expansion will feature growth to the North first as the Port adds space to its existing terminal structure, the second phase which would take a further two years to develop would move southwards, a project that won't get underway until Stage one is complete and operational.

It's at that time that the Port and Maher Terminals will assess market demand and terminal volume to determine the timetable for any second stage of expansion.

One key aspect of the expansion of the Container Port is the planned creation of a road to link the Fairview Port with facilities towards and on Ridley Island,  a much desired transportation corridor that will remove the fleet of container trucks that currently travel along Park Avenue, 2nd Avenue and McBride through the heart of the city.

The road construction along the foreshore towards Ridley will be a welcome change in the traffic patterns for the downtown, where convoys of container trucks rumble through the various intersections through the day.

The progress on the next phase of development is a much anticipated project for the North Coast, one that will provide for construction jobs in the development phase, as well as provide employment for Port and rail operations in the city and region.

As well, the  increase in capacity to the Fairview Container Port, will further move forward the Port of Prince Rupert's footprint on the transportation network across North America.

Residents can make their comments known to the process by contacting the Assessment agency by email at at  FairviewPhase2@ceaa-acee.gc.ca.

Or they can contact the Agency at the following address: