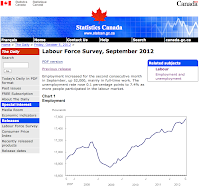 The Northwest corner of British Columbia remains the only part of the province to still mark unemployment in double digits, but with this weeks results from The Labour Force Survey for September from Statistics Canada, improvement has been recorded over the last month.

The Northwest, reporting zone, a vast tract of land from Vanderhoof to Haida Gwaii  still holds the highest amount of unemployed at 10.5 per cent, with roughly 300 more people working in September than were in August.

The breakdown of the Unemployment rate finds that at 10.5 per cent, the Northwest has seen a gradual reduction in unemployment since June, in that month the rate was 12.2 percent , July it dropped a tick to 11.9 percent while August numbers came in at 11.8 per cent.

Those figures do not reflect those of the workforce collecting Employment Insurance at the moment. Nor do they reflect those that have withdrawn from the workforce for any number of reasons. A factor for some that suggest that these monthly reports, don't quite reflect the true nature of the jobless situation in many parts of the province, including the Northwest.

As it is at the moment, the Northwest still however remains the one trouble spot on the Employment picture in British Columbia, other regions of the province reported unemployment rates as follows:


The average Jobless Rate for BC is recorded as 6.8 per cent for September, Canada wide the Jobless Rate registered at 7.4 per cent.