Windy Wednesday on the way for North Coast 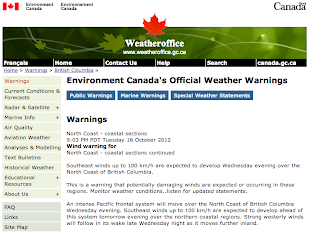 Environment Canada is providing the heads up for North Coast Residents, Wednesday afternoon, evening and overnight could be a rather windy affair in our part of the region.

Tuesday, the Environment Canada Weather Service issued the Wind Warning for the North Coast, outlining the severity of the winds that will arrive as a Pacific frontal system makes its presence known to the North Coast.

Rainfall amounts for the North coast won't be particularly large with anywhere from 25 to 35 mm anticipated as the weather system arrives but, it will be the wind that may provide the most troublesome aspect as the weather pattern moves on.

The Forecast calls for Southeast winds from 30 to 40 kilometres arriving in the morning and into the afternoon, with the more severe winds of up to 100 kilometres an hour developing in the evening on Wednesday.

Strong westerly winds are o follow later in the night Wednesday as the frontal system moves from the Pacific to inland regions of the Northwest.

The Full Forecast from Environment Canada can be found here.
Posted by . at 11:19 PM