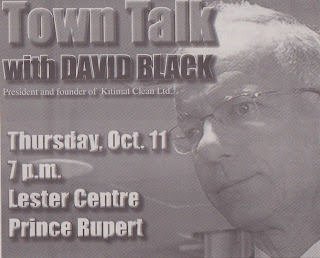 The man behind the proposed Kitimat Oil Refinery is holding a public forum on Thursday in Prince Rupert, providing for the chance for local residents to learn more about the much discussed Northwest mega project.

Black will take to the stage of the Lester Centre on Thursday at 7 PM, to take part in what he is calling a "Town Talk", designed to answer some questions and update Rupertites on the status of his proposed Oil Refinery.

A full page ad in the Northern View on Wednesday described the session as: "an informal, candid discussion of the environmental and economic benefits of a $13 billion refinery in Northwest B. C."

The full page ad went on to explain some of the background on the project and some biography material on its chief proponent.

"Kitimat Clean Ltd. is a private British Columbia company set up to plan, construct and operate an oil refinery in Kitimat, B. C. The refinery will feature state-of-the-art design, specifically for processing Alberta oil sands heavy crude oil, and engineered to be the cleanest upgrading and refining site in the world."

"David Black is President of Kitimat Clean Lt.d. He lives in Victoria, B. C. He earned a civil engineering degree at UBC in 1969 and an MBA at Western in 1971. he is Chairman and majority owner of Black Press Ltd."

The prospect of oil refining on the North Coast grabbed a fair amount of attention back when Black first introduced the project in August, a number of eye grabbing headlines and lead stories moved the idea to the front page of the Vancouver papers and the main story on all newscasts at the time.

Kitimat Clean Ltd. has since established a website that provides some of those early reviews of the announcement as well as a commissioned poll on the topic which involved 1400 respondents from across the province.

That poll found that 78 per cent of British Columbians were aware of the Kitimat Clean proposal, 72 per cent reported that they were in favour of it, while 28 per cent were opposed.

That doesn't necessarily suggest universal endorsement in Northern BC however , of those 1400 respondents only 12.1 per cent were from Northern BC, the largest share of the feedback came from the Lower Mainland and Vancouver Island which combined accounted for 53 percent of all participants.

From all the regions of BC that were surveyed, Northern BC had the lowest of the supportive contributions.

You can review the poll questions and responses to them here.

Since that poll and the early burst of items of interest on the topic, the information flow has slowed down quite a bit, perhaps lost or in deference to the ever increasing noise from the Northern Gateway hearings.

That Enbridge bitumen that is destined to come down a pipeline should it be approved, is to be the main supply for any oil refinery in Kitimat and until the Northern Gateway debate is resolved we imagine any refinery plans will most likely remain in the planning stages.

Still, plans must be made and to that end perhaps we'll learn more Thursday night. Mr. Black is in town for the Northern Ports Symposium which has been taking place since Wednesday evening, it wraps up on Friday as all of the participants hop on a bus for a tour of some of the infrastructure planned for Terrace and Kitimat.

We imagine that Mr. Black's project will be one of the stops on the Highway 37 tour.

Reviews of the Black Symposium on the Kitimat Oil Refinery can be found below:

You can review our archive of items on the Kitimat Oil Refinery proposal here, it's a link which we update regularly when new material warrants it.