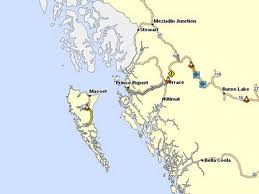 While Prince Rupert residents await the arrival of Wal Mart later this month, the shopping dynamic in the Northwest still seems very much tilted towards the east and the centralization of shopping options in Terrace.

Wal Mart of course is being heralded as a sign of a renaissance in Rupert shopping, preparing to take over the recently closed Zeller's space at the Rupert Square, the giant chain store is going to operate a smaller scale operation in Prince Rupert, one not quite as large as other retail operations across the nation, including the one it Terrace.

Still, it's arrival will be greeted with welcoming arms, the pace of closures in the city of key shopping options indicative of the recent troubles the city has faced.

The city recently issued its thoughts on the commercial sector in the city, suggesting that progress is at hand with the arrival of such shopping options as Chad's Smoke Shop, Express News and Smoke Shop, Dollarama and Rupert Meats to name a few.

However, in that same space of time there have been some high profile closures such as Zellers,  Fields, Mohawk, Pizza Hut and now with rumours percolating that with the arrival of SportChek in Terrace, the Athlete's World in the Rupert Square will be one of the locations Canada wide to close.

Third Avenue, once the thriving symbol of the commercial core still has a large volume of empty storefronts to testify to the decline over the last decade.

With almost equal amounts of openings and closings, basically we're not sure if there is so much as progress at hand over the last year, as there is the city barely treading water when it comes to the commercial options.

While not a complete record (we welcome submissions to refresh our memories), our recollections of the openings and closings of note over the last year or so include the following commercial options.

While the Rupert Commercial sector struggles along its way, things appear to be booming commercial wise in Terrace.

Already home to such big box chain locations as Staples, Canadian Tire, Real Canadian Wholesale, The Brick and the Wal Mart store, Terrace has seen an 8 million dollar revitalization take place at the Skeena Mall. Sportchek opened its doors last week, providing for a full parking lot at the Skeena Mall there for the first time in a long, long time.

Dollarama is also making its plans to operate at the Skeena Mall, as is the Winners chain.

The changing options in the region were noted by the CBC's Daybreak North program last month, with George Baker offering up this review of the commercial sector of the Northwest .

Prince Rupert is clearly a long way away from those heady days of the Royop  Shopping Village project that was to be destined for the BC Hydro site, that but yet another project file gathering dust on someone's book shelf, perhaps to be resuscitated one day in the future.

And until the kind of shopping options available in Terrace can find a home in Prince Rupert, we imagine that the traffic flow on the weekend will be flowing towards Terrace for the foreseeable future.
Posted by . at 10:25 AM