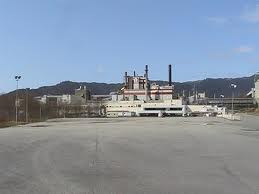 Perhaps the greatest beneficiary of all this talk of development on the North Coast has been the Lester Centre of the Arts, the local performing Arts Centre has been the home for most of the public presentations of late over the variety of projects planned for the North Coast.

The most recent one, a Thursday session featuring David Black, proponent of Kitimat Clean Oil speaking on his plans for an Oil Refinery in Kitimat.

Next up on the Lester Centre marquee, a presentation from the Watson Island Development Corporation.

Scheduled for October 24th from 7-9 PM, the Public Open House will explain how the collaboration between the First Nations of Lax Kw'alaams and Metlakatla, along with Colonial Coal International and Hillsborough Resources will work to develop the pulp mill site into another shipping terminal on the North Coast.

Representatives from the development team will be in attendance to explain the redevelopment process and answer any questions on their plans moving forward.

The Watco presentation was publicly advertised in Wednesday's Northern View, an invitation for the public to learn more about the partners and what the vision is for the long moribund pulp mill site.

The Watson Island site is currently listed on the iNVEST in Northwest British Columbia Website as one of the Major projects of the Northwest.

Of course those plans will require the resolution of the ongoing legal issues between the City of Prince Rupert and Sun Wave, a long running legal battle that seems never ending.

The Prince Rupert and Port Edward Economic Development Corporation's website outlines some of the background on the Watson Island site, couched with a note that the sale of the land to Watco is conditional to a number of factors expected to be resolved within 2012.

As we head towards November of 2012, residents of the city have yet to hear from City Council if those "factors" have been resolved as of yet.

Still, the developmental plans move forward, Watson Island Development Corporation has developed a website that provides a bit of a guide as to where they see the development in the years to come.

Upon its redevelopment, Watson Island will be a site  featuring a bulk shipping terminal with supporting industrial park.

Making use of the existing marine and rail infrastructure already in place, the project once developed, could accommodate a range of commodities, which considering two of the four partners, includes coal shipments.

Local residents will find out more later this month, with further details on the public open house available from the Watco website.

Until October 24th, you can research some background on the project from our Watson Island Archive page
Posted by . at 9:23 AM