Marina plans get a cash injection from the Coast Sustainability Trust 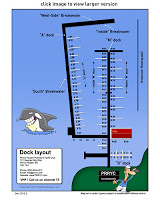 The plans to develop a new marina on the Prince Rupert waterfront moved forward a little bit more this week, as the Coast Sustainability Trust announced that they were putting $250,000 towards the project.

The latest financial announcement moves the project almost to the halfway mark in required financing to make the proposal a reality.

So far, in addition to the Coast Sustainability Trust contribution, the project has received $250,000 by way of a grant from the West Coast Community Adjustment Program as well as $300,000 in conditional funding from the City of Prince Rupert.

The total cost of the project is estimated to be 1.7 million dollars.

The marina development would provide for a 700 foot long concrete float system offering moorage for 32 vessels, a significant increase from the 10 available slots currently available for pleasure boaters.

The lack of  spots for those boaters has long been a concern of Prince Rupert's tourism sector, which fears that a good number of tourism dollars sail by the city each year, simply because there is nowhere for visitors to pull in.

The project in the Cow Bay area is just one of a number of proposals for that area of the city, where a redeveloped Cow Bay area seems destined to be a commercial and tourist oriented shift for the city's eastern waterfront area.

While not part of the Port of Prince Rupert's blue print for redevelopment in the area, the new marina project would clearly compliment the many changes that are in the works for the district.

You can find more background on the project from our North Coast Review item of August 2.