54 Years and Counting for the All Native Basketball Tournament

Prince Rupert's annual celebration of basketball and much more is almost upon us,  as the players and fans of the participating teams in the 54th edition of the All Native Basketball Tournament make the trek to the city.

Beyond the upcoming six days of competitive basketball, visitors and local residents alike will take part in a renewal of friendship and culture, events which have been a long running North Coast tradition.

While volunteers and organizers take care of the last minute details, the transportation from locales both close and distant is already underway.

Starting February 7th, BC Ferries has re-arranged its coastal service for the tournament, with updates on sailing times available from their website, the changes remain in effect until February 20th. 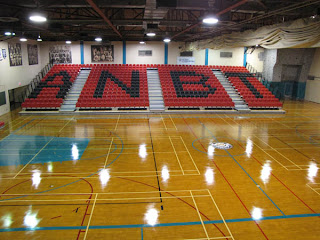 As for the Basketball tournament and associated events, up to date items of interest on the tournament can be found on the Tournament Facebook page, which has already featured much in the way of information and pictures in the lead up to the February 10th tip off and promises to deliver much more through the six days of competition.

Another option for followers of the Tournament is this website page dedicated to the upcoming tournament, among the items of interest a Welcome to Visitors, Sponsorship Information, as well as a schedule and ticket information for this year's event.

Tickets for the Tournament come in a variety of formats, a Season Pass which includes all of the games, the finals and opening ceremonies costs 150 dollars.

A Weekend Pass which runs from Friday night and all day Saturday comes with a cost of 32 dollars.

Admission at the Door for single day events is available as well, but is broken down into three sessions per day. Passes for the morning, afternoon or evening sessions come at a cost of 8 dollars.

Tickets leading up to the tournament can be purchased at the All Native Tournament Office at Number 9 Cow Bay Road (beside Dolly's Fish Market), for those requiring more information the ANBT office phone number is 250-627-8997

The tournament has undergone some minor changes for this years event, with the removal of the "Ringer Rule" the explanation of which is found from this letter from Peter Haugan, the President of the ANBT.

The object of that rule change it seems to provide more incentive for participating teams to take part, hopeful of running the table and claiming the championship of their category.

The Schedule for the ANBT 2013 can be found here (click on Tournament, Schedule and select the category of interest to you).

The first tip of for the 54th edition of the tournament arrives Sunday morning, kicking off six days of high tempo and entertaining basketball action. The Opening Ceremonies, one of the highlights of each tournament year  arrive this Sunday evening at 8 PM.

Through the week, CFNR will be broadcasting games live from the floor of the Russell Gamble Gymnasium of the Jim Ciccone Civic Centre.

As the Tournament moves towards the Championship Finals, we'll provide links to the information that we come across, items that tell us more about the tournament events

Those items will be found below.

February 15-- 54 years and counting for All Native Basketball Tournament (audio)
Posted by . at 1:13 PM

Email ThisBlogThis!Share to TwitterShare to FacebookShare to Pinterest
Labels: 54th All Native Basketball Tournament, February 10 to 16 2013