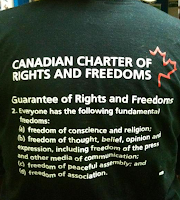 The controversy over the wearing of Charter of Rights t shirts by teachers in Prince Rupert classrooms may live on just a little bit longer now, as the issue has caught the attention of the province's Civil Liberties Association.

To refresh your memory, last week the latest in battle of wills between the Prince Rupert District Teachers Union and the School District played out over the wearing of T shirts which featured passages from Section Two of the Charter of Rights and Freedoms of the Canadian Constitution.

The disagreement, the latest of issues between the two sides, received a further review on CBC's Daybreak North program last week, as both PRDTU President Joanna Larson and School District Superintendent Lynn Hauptman outlined their positions on the controversy, though not in a face to face setting .

The topic gained a bit of notice provincially through items in the Vancouver Sun, here and here, but for the most part that appeared to be the end of the issue on the local scene.

Though as the latest of events show, the T shirt controversy may yet get a second act.

Today the BCCLA weighed in on the topic, releasing it's thoughts on the controversy, calling the ban "laughable", akin to the thing of an Air Farce skit. Arguing it's position that with the ban, "the School District has violated both the teachers' and students' rights to learn, think and talk about fundamental freedoms."

Going further, the BCCLA provides a copy of its letter to Tina Last, the Chair of the Board of School District 52, outlining its concerns over the decision to ban teachers from wearing the shirts, going so far as to summon up some Shakespeare to make their point.

One of their key points being, that "the School District, as a governmental body that is bound by the Charter, simply does not have the authority to forbid teachers from wearing these t-shirts".

They close with a reminder to the School District that it is "bound by the Charter of Rights and Freedoms, and that it does not have the authority to breach the rights contained in the Charter without lawful justification according to the tests set out by the Supreme Court of Canada."

The latest contribution to the discussion most likely means that the topic will remain on the burner for  little while yet.

School District 52 has it's next Board Meeting scheduled for Tuesday, February 12th, we're not sure if the topic makes it to the agenda for next week, but with a Question and Answer Period provided for at every meeting, perhaps the topic may make it into the discussion at some point.