60 Days to Refinery Decision for Kitimat 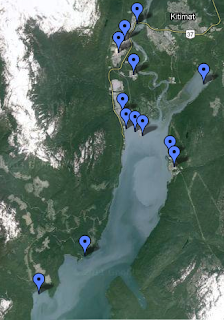 David Black, the British Columbia Newspaper owner who has embraced the concept of an oil refinery for Kitimat, says that the plans for his controversial oil refinery will either move forward in sixty days or the project will end up as many before it we imagine, just another mega project for the Northwest that didn't quite come to fruition.

Mr. Black, last heard from in Prince Rupert back in October, has been rather quiet of late on the publicity side of the push for an oil refinery.

Instead it seems he has been active behind the scenes, putting together financial plans, seeking out customers, financial backers, seeking information from government officials and First Nations across the province, all in the quest to make his much discussed economic vision come to realization.

Yesterday, in the Edmonton Journal he outlined that the proposed Kitimat Clean Ltd. project is now heading into the final sixty days towards a decision.

Outlining for the Alberta newspaper some of the work he has conducted to move the project forward, his belief that the concept of the removal of bitumen shipments; in exchange for finished refined product, will be the key to removing the opposition that the Northern Gateway project has found over the course of the last few months.

His belief seems to be that the resource thirsty Asian markets would look favourably on a refinery shipping Alberta oil overseas, expressing that he has found encouragement from those that he has spoken with in China on the nature of an oil refinery project on the West Coast.

The revealing interview examines a number of his thoughts not only on the nature of the refinery and the pipeline, but how it could remove some of the controversy politically for both the provincial Liberal government and the Federal Conservatives.

The Journal interview provides a fairly in depth look at the optics of the proposed Oil Refinery for Kitimat, the major impact that its development would have on the Northwest economy, as well as the financials that would be required to bring it to realization.

With the suggestion of sixty days until decision time, the Journal piece not only suggests yet another twist in the debate over how best to move Alberta's resources, but offers up some background on what would be an interesting shift in attitudes in British Columbia, should Mr. Black's perceptions on the acceptability of such a project be proven correct.

You can review the Edmonton Journal article here.

He first introduced the concept of the refinery for Kitimat back in August, the first words for the Northwest on the topic found in the video presentation below:

We have  provided for further background on the Kitimat Oil Refinery plans in our Industrial Development Archive section.
Posted by . at 11:56 PM