Nathan Cullen set to take to the Enbridge stage on Friday

Nathan Cullen, The NDP MP for Skeena-Bulkley Valley, is making his way back to Prince Rupert for his second visit in less than a week, this time for an appearance at the Northern Gateway Joint Review Panel hearings. 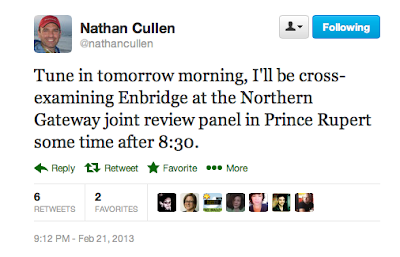 His Friday morning session is one of the more anticipated of recent speaking sessions in front of the panel, perhaps partly because of what has taken place in the past, rather than on what may be ahead for Friday.

In his last appearance in front of the Joint Review Panel, things got a little testy as Enbridge lawyers took exception to Mr. Cullen's line of questioning, suggesting that he was being disrespectful to the process, asking questions that they believed did not fit the parameters of the Hearings mandate.

Some of the items of note from his last appearance at the JRP in February of 2012, can be found below:

In a Northern View interview earlier this week, Mr. Cullen offered up the thought that Friday may provide for a bit of replay of those first discussions of a year ago, but it does not appear that he has any plans to scale back his approach in his second appearance in front of the panel.

The MP took to his twitter feed on Thursday night to advise that he would be in Prince Rupert Friday to cross examine Enbridge at the hearings, suggesting we imagine that Friday's session may provide for more of the fireworks of last February, with more than a few stops during the presentation on matters of procedure.

The Northern Gateway Hearings are in the middle of their second session of the month in Prince Rupert, this current sitting of the panel will continue on until the end of next week.

You can listen in to the Hearings through this live audio feed from the Convention Centre hall.