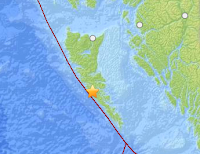 The earth once again has sent up a reminder to residents of Haida Gwaii that they live on an active earthquake zone, as a pair of minor temblors have rumbled underneath in the last couple of days.

The first of the reminders came on Sunday morning at 7:32 when a 4.3 jolt occurred off the west coast of the Islands, the second one came this morning at 5:41 when 4.5 temblor rumble 134 kilometres south of Masset.

No damage was reported from either of the minor earthquakes, though they do serve as a reminder of the 7.7 earthquake of October and the frequent after quakes that have taken place since then.

CFTK had details of the twin rumbles posted to their website this morning.

You can review the seismic activity along the North Coast and Haida Gwaii from our archive of events.
Posted by . at 9:31 AM