Can someone hand the Provincial Government a roadmap!

For the second time in recent months, it appears the provincial government has come to the conclusion that the road ends in Terrace and that any further travel west just isn't possible.

We recounted in December, that the Provincial government seemingly came to the conclusion that North Coast residents must like to travel, as for the second time in less that four months they have scheduled their much vaunted BC Jobs Fair for a another appearance in Terrace, the idea of sending the caravan west another hour and a half or so apparently it seems was not something that was entertained.

Now comes word that if local business people wish to learn more about the ramping up of the return of the PST to the province (coming our way April 1st by the way),  then another road trip will be on the agenda.

As part of what is called the PST Outreach, British Columbians can watch the Return of the PST Overview video  and locals can take advantage of the PST webinars that are planned. 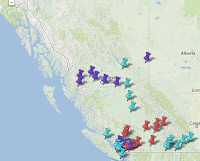 But for that in person, face to face conversation, well North Coast residents will apparently be required to gas up the car and head out on the highway.

The list of seminar hosts is pretty lengthy, stretching across the province almost every nook and cranny it seems, but travel west of Terrace once again it seems just isn't on.

Two seminar sessions were announced for the Northwest  one for Kitimat on March 7th and another on March 8th in Terrace, as we can see from the push pin map from the PST Outreach team, the thought of a quick spin out to the North Coast just isn't on the agenda.

Clearly the provincial government seems to believe that Terrace and to a lesser degree Kitimat we guess, have become the centres for government services and information for the Northwest.

At least judging by the lack of interest that the various provincial departments have in coming to visit residents in a westbound direction on Highway 16, even though Drive BC offers up a handy map planning application to help with the travel planning.

Government Ministers will apparently jump at a chance to come on over for a photo op, but offering up some services as beneficial to the North Coast as a Jobs Fair, or a PST seminar doesn't seem to make it to the day planners of many government departments.

As for the return of the PST and the impact it will have on business owners of the province, you can find out more about the PST Outreach program from the Provincial government website.
Posted by . at 10:30 AM

Email ThisBlogThis!Share to TwitterShare to FacebookShare to Pinterest
Labels: PST information sessions planned for Terrace and Kitimat in March