The boast of the Terrace Airport of being the Northwest's busiest airport will remain secure and continue on into the start of 2013.

In an answer to the plans of rival airline WestJet to launch it's own regional carrier (WestJet Encore), Air Canada's British Columbia office has announced a number of increased flights to airports across the province.

Both Terrace and Smithers are set to benefit from the increase in departures and arrivals, as Air Canada ramps up its service to the Northwest. 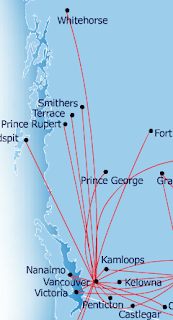 While service additions were added to some 19 airports, at the moment, it would seem Prince Rupert's airport won't be one of those included in the revised timetable out of the Vancouver hub.

Starting in July, Air Canada Express will increase it's capacity to Terrace by 25 percent, giving the Terrace airport five daily Air Canada flights in the summer. Smithers will see a 50 percent boost in seat capacity in and out of the Bulkley Valley airport.

Air Canada also announced that a new generation of turboprop jets will be part of the British Columbia expansion, as the airline rolls out its own line of Q400 planes from Bombardier, though it appears at the moment they won't be part of the arrivals and departures at Smithers and Terrace.

The introduction of the new planes and revised scheduling is seen by many airline analysts as Air Canada's pre-emptive response to the soon to be launched WestJet Encore service.

The announcement of the WestJet destinations was anticipated for January, but was delayed until sometime this month.

Airport officials from around the Northwest, including Prince Rupert made their pitch for WestJet encore service last year in Calgary, all will be eagerly awaiting word from WestJet to hear if they made the cut.