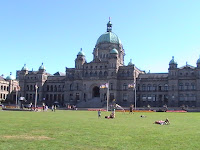 When the Liberal Government of Premier Christy Clark delivered the throne speech this week, no corner of the province was paying more attention than the Northwest, which would seem to be the one section of the province to benefit the most from any massive expansion of the LNG industry in the province.

The Northwest as we have all been following of late, is pretty becoming the El Dorado of the Liquid Natural Gas rush, not so much for the resources to be found, but more for the transportation hub that it appears marked to be, the preferred shipment point to send the product to thirsty consumers in Asia.

As we have recounted in the past, (see our archive of LNG related items) at least two of the projects for export facilities have been tagged for Prince Rupert, a few more for Kitimat, with one export licence already granted for one of the Kitimat projects.

In the course of her government's Throne Speech, the Lieutenant Governor delivered the pre election thoughts of a struggling Liberal government, one which seems to banking all of its political capital on the chase for LNG development and dollars.

As the speech delivered point after point, it became obvious that the Liberal's are hoping that British Columbian's will buy into the prospect of untold billions of revenues from an industry that it would seem to the Liberals is more than ready to start writing the cheques.

An economic driver that will deliver such things as the opportunity to reduce debt, improve social services and dreamer of dreams, eliminate the provincial Sales Tax.

In short, the LNG hoopla it seems, is our very own version of the Alberta Oil Sands. The Liberal's and more to the point, Premier Christy Clark, hoping to ride the euphoria over it all into yet another majority government at the Legislature and turn the province into the ultimate of resource based economies it would seem.

So we're not sure which is more problematic for the Premier in the days after her speech was delivered.

The fact that pretty week EVERYONE has panned her Prosperity fund hoopla, suggesting that the massive growth of the LNG shipment industry isn't going to happen with quite as much gusto as the Premier suspects  (damn there goes every Rupertites' retirement thinking).

OR, the fact, that pretty well everyone sees the Throne speech as some kind of pie in the sky electoral blue print, a wishful wish list for a government that seems to be losing its resonance with the population with each passing day.

The prospect of LNG development and with it the need for transportation facilities on the North Coast, will clearly be a part of the future, but we suspect not with the same frantic pace that the declarations of the past week might suggest.

For those on the North Coast thinking that the gold rush is almost upon us, the cautionary tales perhaps will serve to put a bit of a brake on the rather over zealous declarations of a boom time set to rise on the horizon.

The reviews of the Premier's Prosperity declaration have, for the most part, been of the it's not going to quite happen that way variety, a sample of many of them can be found below.

Email ThisBlogThis!Share to TwitterShare to FacebookShare to Pinterest
Labels: LNG the Prosperity Fund and the Prospects for the BC Liberals