An already large riding, gets a little larger and maybe gets a new name 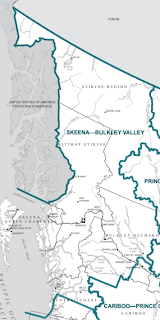 The federal electoral riding of Skeena-Bulkley Valley is going to get a wee bit bigger and with the change to the boundaries, the opportunity it seems has arrived for perhaps new name.

Nathan Cullen, the NDP MP for the riding offered up the details on the proposed boundary changes as part of a release on his website, which advises that with the proposed change, the boundaries for the riding will now take  in the communities of the Bella Coola Valley.

The MP is in support of the proposed change, stating that he always found it never really made much sense that the different communities of the Valley were split up among the federal riding's.

The proposed boundary description can be found from the Federal Electoral Boundaries Commission website, which details the planned changes to the riding which will boast a population of 90,586.

The boundary change is planned as part of the plan of the Electoral Boundaries Commission to add six more ridings for British Columbia to the House of Commons. Five of the riding's will be created in the Lower Mainland, while the sixth will be located on Vancouver Island.

While they're redrawing the map, it could be that they'll have to change the letterhead as well.

The NDP MP floated the idea of a name change with a recent twitter contribution. 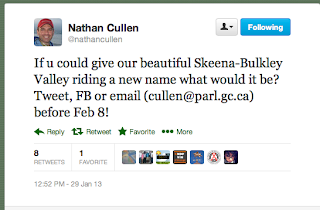 Constituents of the riding have until February 8th to submit their contribution to any possible name change options. You can review some of the suggestions and opinions on the project from the MP's twitter feed.

Email ThisBlogThis!Share to TwitterShare to FacebookShare to Pinterest
Labels: Proposed boundary change to Skeena Bulkley Valley and a possible name change too