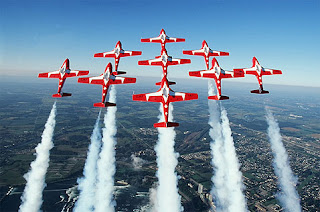 Earlier this month we mentioned that even though the City had turned down the local organizing committees request for funding for a Snowbirds appearance in the city, the famed aerobatic squadron still had the city pencilled in on the agenda for an August performance.

And as developments seem to have provided for, they very well may be setting their course north in the middle of August.

Tuesday night provided for a surprising reversal of thought for Prince Rupert City Council, as City Council announced a decision made in an earlier closed session, that council was issuing a grant for 7,000 dollars to the 2013 Snowbirds Organizing Committee.

When we last left the issue on January 14th, Council members had weighed in with their regrets that owing to the current financial situation that the city faced at this time,  that they could not provide the requested funding of 15,000 dollars to the Organizing committee.

That January 14th session had featured a rather passionate declaration of support from Councillor Garon in favour of the funding request, but during the course of discussion on that topic Councillors Ashley, Carlick-Pearson and Thorkelson all expressed their opposition to the funding request.

In the course of their discussion points, the trio of councillors reminded Council that they had already turned down, or reduced funding to a number of other community groups and so at that time couldn't see their way to approving the requested Snowbird funding request.

You can review the wide range of the discussion at that council meeting from the City's video archive (running from 51:45 to 1:05:45)

When it came for the head count at that January 14th council session, only Councillors Kinney and Garon voted in favour of the funding request for the Snowbirds committee.

At that point, with that vote and the rather sombre nature of the discussion, one had the impression that the issue was settled, with the City holding its wallet closed on the prospect of funding a portion of the proposed air show.

With Rob Grodecki of City Staff advising that "Council wants to release information, that they are issuing a Grant for 7,000 dollars to the 2013 Snowbirds Organizing committee and also that the Council has directed staff to issue issue tax receipts for people who make cash donations in support of the 2013 Snowbirds event."

We suspect that the majority of the city's residents probably will welcome news of the proposed show moving forward, and frankly anything that helps to provide for an event of this nature in the community seems like a fairly secure investment, especially with fundraising options that could reduce the need for, or even return the grant in the first place.

But what's confusing to the casual city observer, is the nature of the mechanics of the decision that has been made by council to move the process forward.

The previous discussion of January 14th on this funding request (and as all other funding requests seem to require), was held in open public session, as we outline above from the City Video archives.

In fact, as we have observed over the last year, community groups from the Lester Centre, the Golf Course Society, to the Spay and Neuter advocates as well as many others, all appear in front of council to make their case.

At those times council discussed the issue, usually with what is now the standard caveat of an expression of concern over the financials of the city at this time, after which they hold their vote on the funding request yea or nay.

This time however, while with a reduced amount of more than half of the original 15,000 dollar grant request, the discussion and approval it appears, was held in closed session.

All of which leaves us to wonder how the Councillors previously against the funding request, came to change their mind, which of course is their right.

However, those are the kind of issues that city residents most likely expect to be discussed in an open forum, where opinions are expressed on the public record.

To announce the grant as kind of an in passing note at the end of a council meeting, does seem to be something that might raise a few eyebrows.

A more detailed and transparent explanation as to how the decision was reached, would most likely have been helpful for those that like to keep track of the city's financial distributions.

It is of interest to note that Councillor's Thorkelson and Garon both were absent from the council session on Tuesday night.

We imagine Councillor Garon, being an advocate from the very beginning for the funding request, will be pleased with the change of direction from Council on the funding issue.

Perhaps we will learn on February 25th what Councillor Thorkelson might think of the changing nature of the issue at hand.

The 25th being a Committee of the Whole Meeting, also provides the opportunity for the public to ask questions of council as well.

Maybe at that same time and perhaps in answer to some of those potential questions from the public, the remainder of Council will weigh in and explain what factors were in place that led to the reversal of their original decision of January 14th.

The Northern View picked up the theme of the Snowbird reversal in their February 20th edition:
Council Reverses decision not to fund Snowbirds (Nor View e edition page 5)