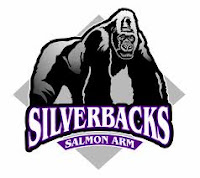 Northwest hockey players with thoughts of a junior hockey adventure will want to circle April 26-28 on their calendars, on that weekend members of BCJHL's Salmon Arm SilverBacks will be setting up camp in Kitimat.

The Salmon Arm team, already familiar with talent from the Northwest will hold a two day evaluation camp at the Tamitik Arena that weekend, as coaches from the BCJHL team as well as the team's General Manager Troy Mick put Northwest players through the paces.

The evaluation camp is open to players born between 1994 and 1998, beyond the usual skills testing and on ice drills of such camps the SilverBacks have other plans for the weekend.

The team plans on holding a symposium on junior hockey in the province, providing would be players and their parents an idea as to what the junior hockey circuit is all about and what is required from players to make the cut.

The SilverBacks will also conduct fitness training sessions, one full practice, four games and at the end of the weekend a Top prospects game.

A number of Northwest players have started their path towards the higher levels of hockey through the BCJHL.

Prince Rupert has recently seen goaltender Frank Slubowski start his time off in the BCJHL when he played for the Alberni Valley Bulldogs, he now is playing for the University of Western Michigan Broncos and is a candidate for US College Hockey's Hobey Baker award.

Devon Oakes is another Prince Rupert Minor Hockey Association alumnus who has moved on to the competitive nature of junior hockey, spending time in Kamloops with both their WHL team the Blazers and the BCJHL team the Storm.

You can find out more information on the Evaluation Camp from the SilverBacks website.

CFTK-- First Ever Junior Hockey Evaluation Camp To Be held in the Northwest This Spring
Posted by . at 8:51 AM

Email ThisBlogThis!Share to TwitterShare to FacebookShare to Pinterest
Labels: BCJHL Team to hold evaluation camp in Kitimat in April