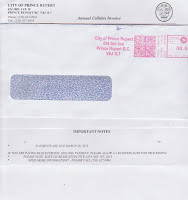 The first of two reaches into your bank account for 2013 is underway, as the City of Prince Rupert begins to mail out its annual City Utilities bills, the first of which began to arrive in mailboxes across the city late last week.

And with another year of billing arriving, the cost for most of Prince Rupert's taxpayers is going to go up, once again there is an increase in the cost of services to city's resident's the average uptick apparently hovering around the forty dollar mark for 2013.

The Utilities Invoice, is not to be confused with the Property Tax Invoice, that City bill comes around at the start of July, the February billing focuses on the Water, Sewer and Garbage services and provides the City with a bit of financial room to move for the start of the year.

The City Explains the reasoning of the split bills as such:

The City has a page of its website dedicated to all items of note on taxation you can access that page here.

Once again this year, those that pay their Utilities Invoice by March 28th will be available for a discount, reducing the total amount of the yearly, a residential taxpayer with an invoice around the 1,100 dollar mark for instance would qualify for a reduction of close to 110 dollars should they pay promptly by that March 28th date.

Which at least gives the Prince Rupert taxpayer bit of  financial reserve to draw on for the next phase of the billing in July.

However, if the omens from Prince George are any indication, that bonus reduction may soon be a thing of the past, that Community recently announced it was eliminating the Discount on payment before deadline, in its place adding a ten percent surcharge to those that did not pay on time.

The loss of the discount aspect of their utility bills would seem to have been a decision by Prince George Council that has not been particularly well received by the locals there.

Taxation issues are always a popular and sometimes controversial theme in the city, you can review some of the past discussion from our City Taxation Issues archive page.
Posted by . at 1:09 PM