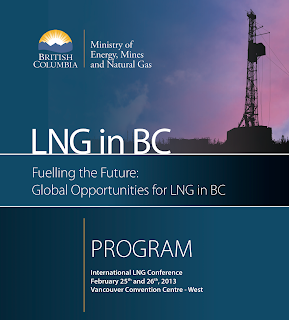 The two day conference opened up on Monday at the Vancouver Convention Centre and the opening day saw a number of presentations and panel discussions on the topic of Natural Gas development and the plans to ship it from Northwest terminals.

The Vancouver conference does appear to be more Kitimat focused than an overview of the Northwest, much of the discussion from the two day meeting seems to be concentrated mainly on the plans to develop the Port of Kitimat into an LNG shipment point.

Day One featured a number of overviews of the LNG plans, including perspectives from First Nations and Community leaders from the Kitimat region, as well as a review of the LNG development thoughts from a more global perspective, mainly focused on Asian destinations.

Skills and Development training and the impact of LNG development on the province's Hydro infrastructure also were part of the day's events.

Day Two will again focus on the Global Economics of LNG prospects, included on the agenda is a look at the potential markets for the product, with a major Panel session set to discuss on the economics and security of energy supplies from the LNG industry.

Transport Canada will provide an overview of Marine Safety and Security in the morning, while the afternoon and final session of the conference will examine the prospect of LNG as a Transportation Fuel.

You can review the entire agenda of events from the Conference Program link of the BC government website.

Monday also offered up the news that the Federal Government had approved another export permit for the prospect of shipment from a North Coast port. The announcement of a 25 year export permit for LNG Canada Development Inc.  to export LNG  marks the third such long term export permit granted since 2011.

The Kitimat plans have been moving forward rather quickly over the last year. The announcement of the export permits and arrangements with First Nations on royalties, just the latest development in the lengthy process that leads from the concept of LNG development to actual shipments.

For the Prince Rupert region there are currently two LNG proposals actively under consideration, the Progress/Petronas project for Lelu Island. A project that as we outlined last week, the Canadian Environmental Assessment Agency has recently issued a call for comments on, a process that will assist the agency in it's decision as to the further the scope of any review process to come for it.

The other project proposed for the North Coast is the BG group LNG project, which does not seem quite as advanced as the Petronas/Progress plan as of yet, but should it move forward would also see a terminal development take place in the Lelu Island area.

And as we explored on the blog last week, the Provincial Government is hopeful of a potential third LNG option for the North Coast, seeking to auction of land north of Prince Rupert, in an area once tapped by Dome Petroleum for a terminal back in the 1980's.

The spurt of announcements and interest in the proposed LNG developments of the Northwest has provided for a fair amount of review in the media these days, focused mainly of the projects and of the interest of the current BC Government to see the process move forward.

The CBC's Daybreak North program recently featured  a pair of reports on the LNG developments and in March, Bill Good, the host of one of the province's most listened to talk shows on CKNW radio Vancouver will be in Prince Rupert with a full three and a half hour program dedicated to the topic of LNG development.

Indicative it would seem of the growing interest in the proposals and providing perhaps one of the themes of the provincial election to come in May.

You can find more of our items on the LNG file from our archive page.
Posted by . at 9:50 AM