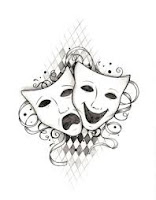 Students of Alison O'Toole's Drama program at Charles Hays Secondary are on the road this weekend, destined for Terrace and the regional drama zones presentations running Thursday through Saturday night.

The Charles Hays students will be competing with students from Kitimat, Smithers, Hazelton, Houston and Terrace, with Caledonia acting as the host school for this years competition .

Other performances on the weekend include:

The performances take place at the R.E.M Lee Theatre, with shows each evening starting at 7:30, with the presentation of awards taking place on Sunday. Adjudicator Steve Keitzmann will offer up a review and work with the cast of each presentation in the day following their performance.

The plays to be presented as part of the zones competition are in the running to claim a spot in the provincial drama festival to be held in Vancouver later this spring.

Before the first curtain lifted on Thursday evening, the Terrace Standard provided this preview of the weekend competition.

For those that don't make the trip to Terrace, you can view the two Charles Hays productions in March when they hold their annual Desert Theatre sessions March 8th and 9th at the Tom Rooney Playhouse on 3rd Avenue West.