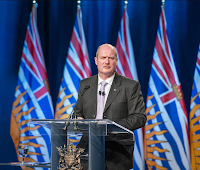 Whether it ever proves to be a working document won't be known until after the May election, but in the lead up to that election campaign, Premier Christy Clark's Finance Minister Mike de Jong delivered the Liberal governments blue print on Tuesday.

A wide ranging document of number crunching that would provide for a small surplus, should all the revenue streams provide as designed.

Should the NDP prove victorious, it's safe to assume that they would be redefining the financial plan with their slant firmly in place and should the Liberals grab yet another victory, there's a good chance that tweaking would quickly follow, usually in the form of a financial statement or some such convenience of government.

Still, the Budget is one of the key statements of any government, a road map of sorts of where they hope to go and how they hope to pay for it.

Some of the highlights from Budget Day 2013 included:

There will be a temporary increase in the personal income tax rate for those above $150,000 dollars, with an additional 2.1 percent to be collected over the next three years.

The Corporate tax rate will increase by 1 per cent

Tobacco Taxes will increase by $2 per carton effective October 1st.

The Government will sell off a number of assets hoping to generate $625 million for the province.

Starting in April of 2015, there will be an early childhood refundable tax credit in place worth up to $660,  for families with children under six

Using money from an educational fund created in 2007, there will be a one time grant of $1,200 for children born after January 1, 2007, which will be deposited into a Registered Education Savings Plan.

The Ministry of Education will get an increase of less than one percent, while the Ministry of Advanced Innovation and Technology will see a reduction of 46 million dollars over three years.

The Budget will set aside 54 million dollars for RCMP services over the next three years.

The full highlights package and other Budget related information from the Ministry of Finance can be found here.

More than a few observers have suggested that the Liberals have done Adrian Dix and the NDP a favour, putting in place some of the tax increases that the NDP were suggesting might  be necessary, though we imagine not for all the same reasons as the Liberals may have in mind.

The fact that the budget details revealed today, may not be of much concern by May was also a theme of many a political contributor today.

A valid thought considering the fact that the budget won't be debated or voted on prior to the May 14th election, making it really not much more than a talking point in the short term.

One person clearly not impressed with the document is Martyn Brown,  a Liberal insider who had little kind to say about the Clark Government's financial plan.

Probably the Premier's only saving grace from that particularly harsh outburst being, that Brown is the former Chief of Staff to Gordon Campbell, make what you will of all that internal Liberal nastiness.

Some of the other reviews of the Budget of 2013 can be found below:

Email ThisBlogThis!Share to TwitterShare to FacebookShare to Pinterest
Labels: BC Budget February 19 2013